Ten years ago, mirrorless cameras started rolling out one after the other from renowned brands including Leica, Olympus, Fujifilm, Pentax, and Panasonic. In 2010 Sony came into the picture bringing out mirrorless interchangeable lens cameras in their complete form. Between 2013 and 2015 Sony launched a series of high-end mirrorless camera. Alpha 7S, 7SII, and Alpha 7RII came in with an improved viewfinder and unmatched image quality and video recording capabilities. Mirrorless cameras for the first time had outdone DSLRs and Sony had shaken the roots of DSLR manufacturers. Mirrorless cameras have been adopted by several professional photographers since then. The diversity of colors offered by Sony’s high-end MICLs (mirrorless interchangeable lens cameras) is unmatched in quality. The popularity and reliability of MICLs have motivated imaging giants Canon and Nikon to tread on the same path as Sony. Canon was a bit early in adapting to change and already has EOS M series with mid-range MICLs.

While DSLRs and mirrorless cameras have many characteristics that differentiate each other, they do share one important feature that separates them from all other types of cameras. They’re interchangeable-lens cameras; you can swap out the lens and attach another type of lens. For example, if you need to capture more of a scene, you can use a wide-angle lens, or if you need to get closer to the action, you can use a telephoto lens. The photo below shows the basic designs for both DSLR and the mirrorless camera.

How does DSLR camera work?

DSLR cameras have the following industrial design: light enters through the lens and gets bounced off a mirror, through a special prism, to end up at the viewfinder (Optical viewfinder). So, you actually see the scene through the lens. When you click the shutter button, the mirror flips up, which allows light to hit the actual image sensor on the camera, and your photograph is taken.

What is an optical viewfinder?

How does mirrorless camera work?

In a mirrorless camera, it has no flip-up mirror, and thus the term “mirrorless” was born. Light passes through the lens and right onto the image sensor, which captures a preview of the image to display on the rear screen. Some models also offer a second screen inside an electronic viewfinder (EVF) that you can put your eye up to and preview the image.

What is an EVF viewfinder?

The EVF has many advantages over the optical viewfinder; the following list summarized these benefits:

On the other hand, EVF has some limitations:

In digital cameras, the image sensor is essentially a piece of digital film (sensor) that captures light, in much the same way actual film does. Full-frame DSLR cameras have image sensors that are the same size as a piece of 35mm film, but most consumer-grade DSLRs and virtually all mirrorless models are crop-sensor cameras. The figure below shows the common sizes of the digital sensor, also the table below illustrates the actual sizes and the corresponding crop factor. 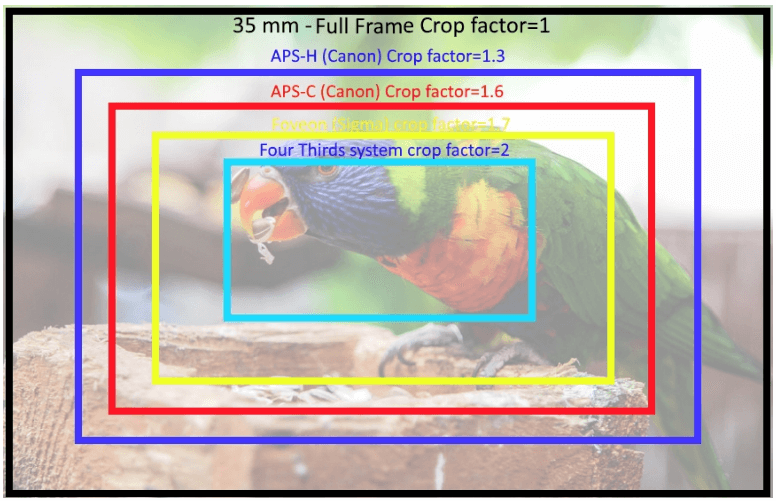 The most common format of mirrorless cameras is the Micro Four Thirds, which refers to the size and shape of the image sensor itself as well as the types of lenses that can be used on these models. Other mirrorless cameras use an APS-C sensor, which is the same size sensor used in common DSLRs such as some Canon models.

The crop-sensor is smaller than the full-frame, which leads to two notable implications:

The Pros of Mirrorless Camera:

The cons of Mirrorless Camera:

What Is The Best Camera For Photography? – The 10 Best DSLRs

Thanks for reading, I hope you enjoyed the article, if you have any questions just post them below & I will be happy to answer you.