If you have a lack of the motivation to keep taking images (something all artists struggle with from time to time) or you are looking for that little push to get back to photography, or just want to read more inspirational quotes about photography, you are at the right place.

While looking at the inspirational work of other photographers can sometimes give you the inspiration you need, it can also limit the boundary of your creativity. You can get the extra kick of energy and inspiration from reading the quotes from famous photographers who have gone through similar struggles in their lives.

I have compiled a collection of the most inspirational photography quotes of all time from some of the most famous artists, photographers, and writers in history. I really wish that their quotes would inspire you to work harder and become the photographer you have always wanted to be. 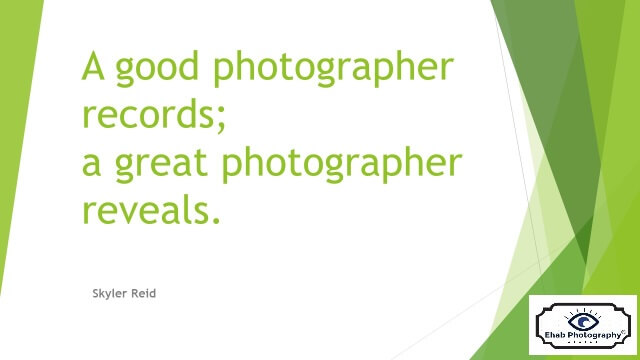 What I like about photographs is that they capture a moment that’s gone forever, impossible to reproduce.

The best thing about a picture is that it never changes, even when the people in it do.

I am forever chasing light. Light turns the ordinary into the magical.

You know, I really don’t think you learn from teachers. You learn from work. I think what you learn, really, is how to be – you have to be your own toughest critic, and you only learn that from work, from seeing work. 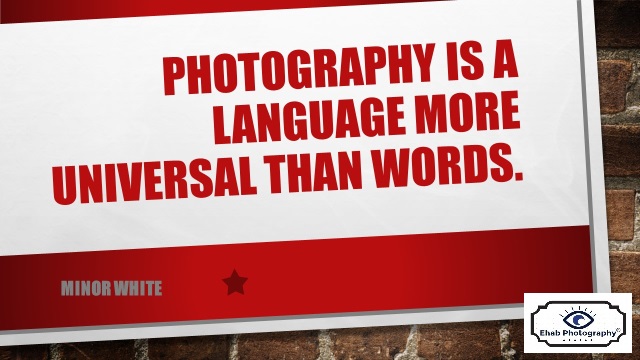 Photography is an immediate reaction, drawing is a meditation.

I think life is too short not to be doing something which you really believe in.

The whole point of taking pictures is so that you don’t have to explain things with words.

It can be a trap of the photographer to think that his or her best pictures were the ones that were hardest to get.

The pictures are there, and you just take them. 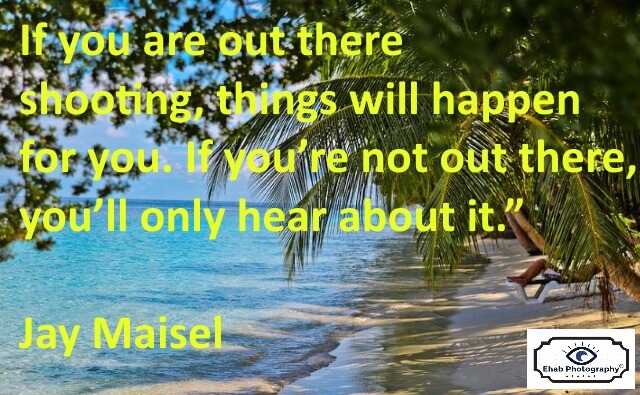 If I have any ‘message’ worth giving to a beginner it is that there are no shortcuts in photography.

All photographs are accurate. None of them is the truth.

Vision is the art of seeing what is invisible to others.

If Photoshop is the answer, you’re asking the wrong question 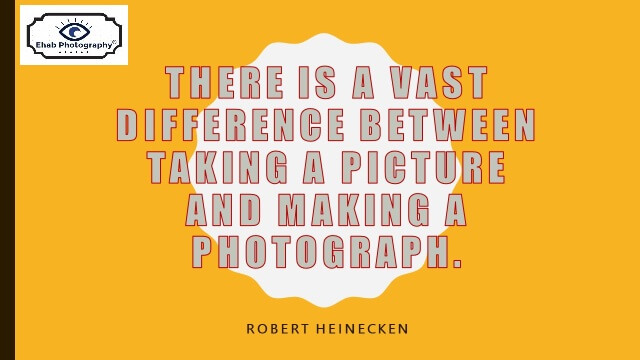 Photography records the gamut of feelings written on the human face, the beauty of the earth and skies that man has inherited, and the wealth and confusion man has created. It is a major force in explaining man to man.

The painter constructs, the photographer discloses.

Photography for me is not looking, it’s feeling. If you can’t feel what you’re looking at, then you’re never going to get others to feel anything when they look at your pictures.

The world moves fast, changing everything around us with each new day. Photography is a gift that can keep us in a moment forever, blissfully eternal.

A photographer is like a cod, which produces a million eggs in order that one may reach maturity. 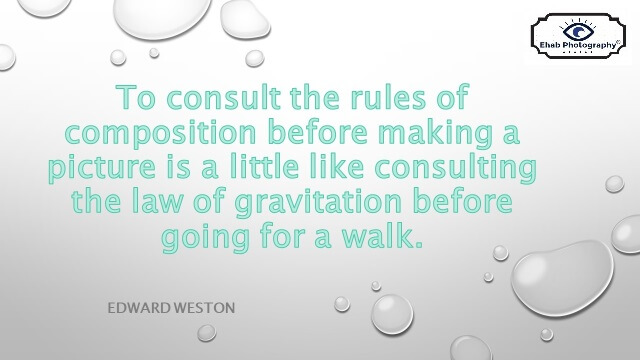 Seeing is not enough; you have to feel what you photograph

When I say I want to photograph someone, what it really means is that I’d like to know them. Anyone I know I photograph.

I really believe there are things nobody would see if I didn’t photograph them.

The two most engaging powers of a photograph are to make new things familiar and familiar things new.

I think good dreaming is what leads to good photographs. 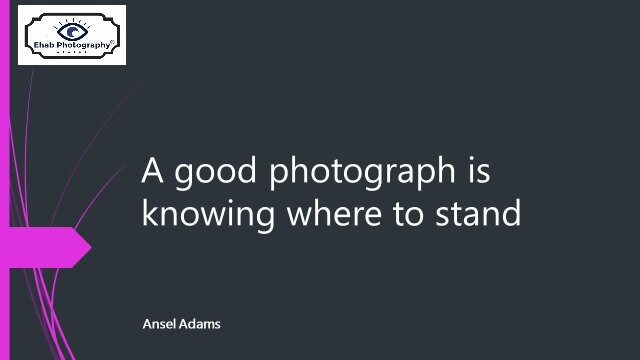 A picture is a secret about a secret, the more it tells you the less you know.

If I could tell the story in words, I wouldn’t need to lug around a camera.

A camera is a SAVE button for the mind’s eye. 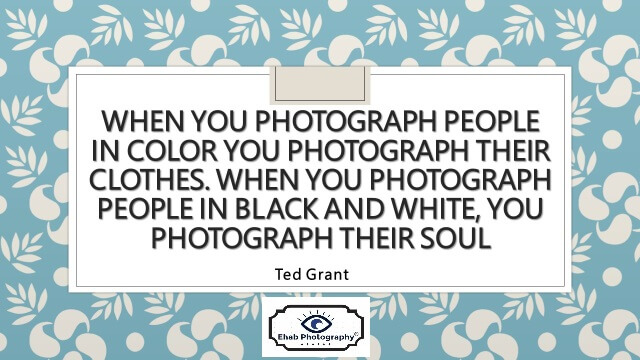 To me, photography must suggest, not insist or explain.

We are making photographs to understand what our lives mean to us.

I tend to think of the act of photographing, generally speaking, as an adventure. My favorite thing is to go where I’ve never been.

You cannot possibly hit the shutter without leaving a piece of you in the image. 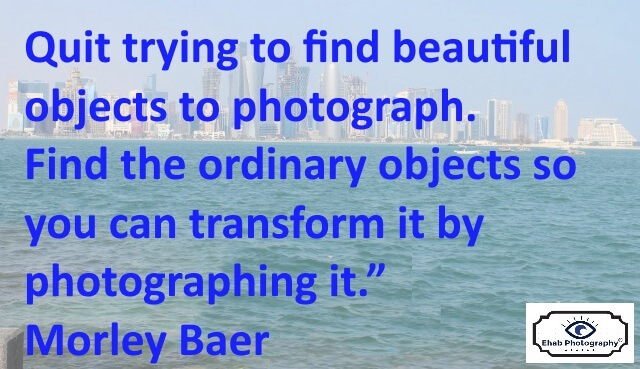 Photography is a way of feeling, of touching, of loving. What you have caught on film is captured forever . . . it remembers little things, long after you have forgotten everything.

You don’t take pictures, they take you.

The single most important component of a camera is the twelve inches behind it!

For me, the subject of the picture is always more important than the picture. 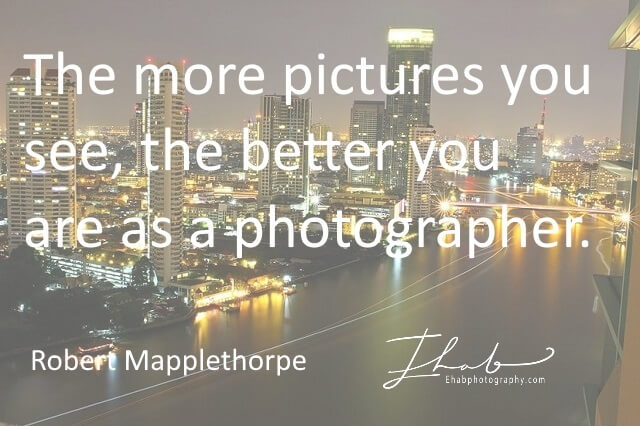 One should really use the camera as though tomorrow you’d be stricken blind.

To photograph: it is to put on the same line of sight the head, the eye, and the heart.

If you want to be a better photographer, stand in front of more interesting stuff.

The camera is an excuse to be someplace you otherwise don’t belong. It gives me both a point of connection and a point of separation.

No, you don’t shoot things. You capture them. Photography means painting with light. And that’s what you do. You paint a picture only by adding light to the things you see. 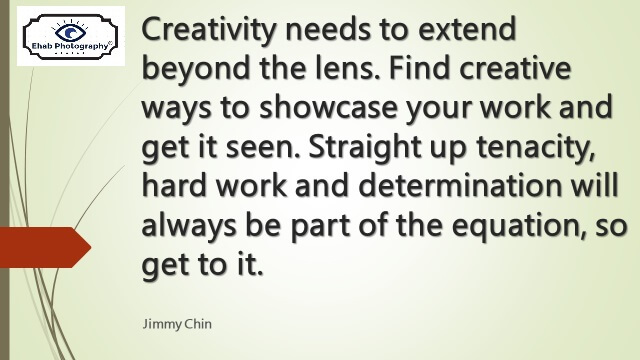 There is one thing the photograph must contain, the humanity of the moment.

It’s weird that photographers spend years or even a whole lifetime, trying to capture moments that added together, don’t even amount to a couple of hours.

Sometimes one waits too long for the perfect moment before snapping the picture. You never realize that you needed was to change perspective.

The camera is much more than a recording apparatus, it is a medium via which messages reach us from another world.

The picture that you took with your camera is the imagination you want to create with reality.

For me, the camera is a sketch book, an instrument of intuition and spontaneity.

The eye should learn to listen before it looks. 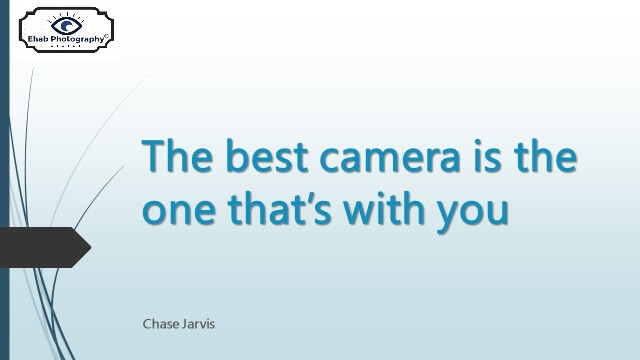 There is a creative fraction of a second when you are taking a picture. Your eye must see a composition or an expression that life itself offers you, and you must know with intuition when to click the camera. That is the moment the photographer is creative. Oop! The Moment! Once you miss it, it is gone forever.

All photographs are memento mori. To take a photograph is to participate in another person’s (or thing’s) mortality, vulnerability, mutability. Precisely by slicing out this moment and freezing it, all photographs testify to time’s relentless melt.

My life is shaped by the urgent need to wander and observe, and my camera is my passport. 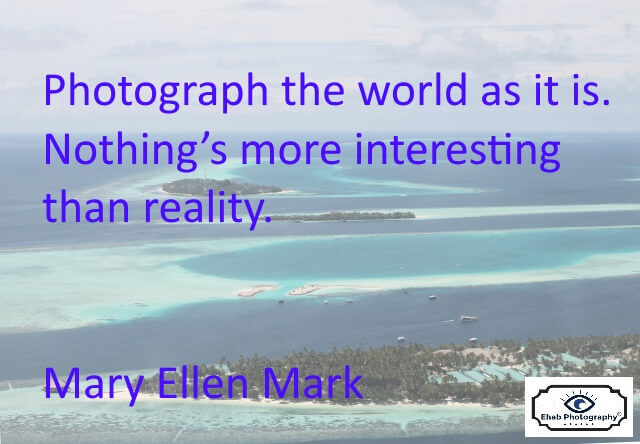 If a photographer cares about the people before the lens and is compassionate, much is given. It is the photographer, not the camera that is the instrument.

Light makes photography. Embrace light. Admire it. Love it. But above all, know light. Know it for all you are worth, and you will know the key to photography.

The only photographer you should compare yourself to is the one you used to be.

A good snapshot keeps a moment from running away.

Your first 10,000 photographs are your worst. 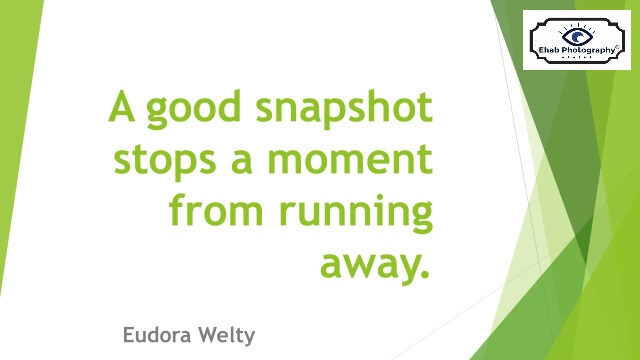 Be yourself. I much prefer seeing something, even it is clumsy, that doesn’t look like somebody else’s work.

Photography is the simplest thing in the world, but it is incredibly complicated to make it really work.

To me, photography is an art of observation. It’s about finding something interesting in an ordinary place. . . I’ve found it has little to do with the things you see and everything to do with the way you see them.

Photography takes an instant out of time, altering life by holding it still. 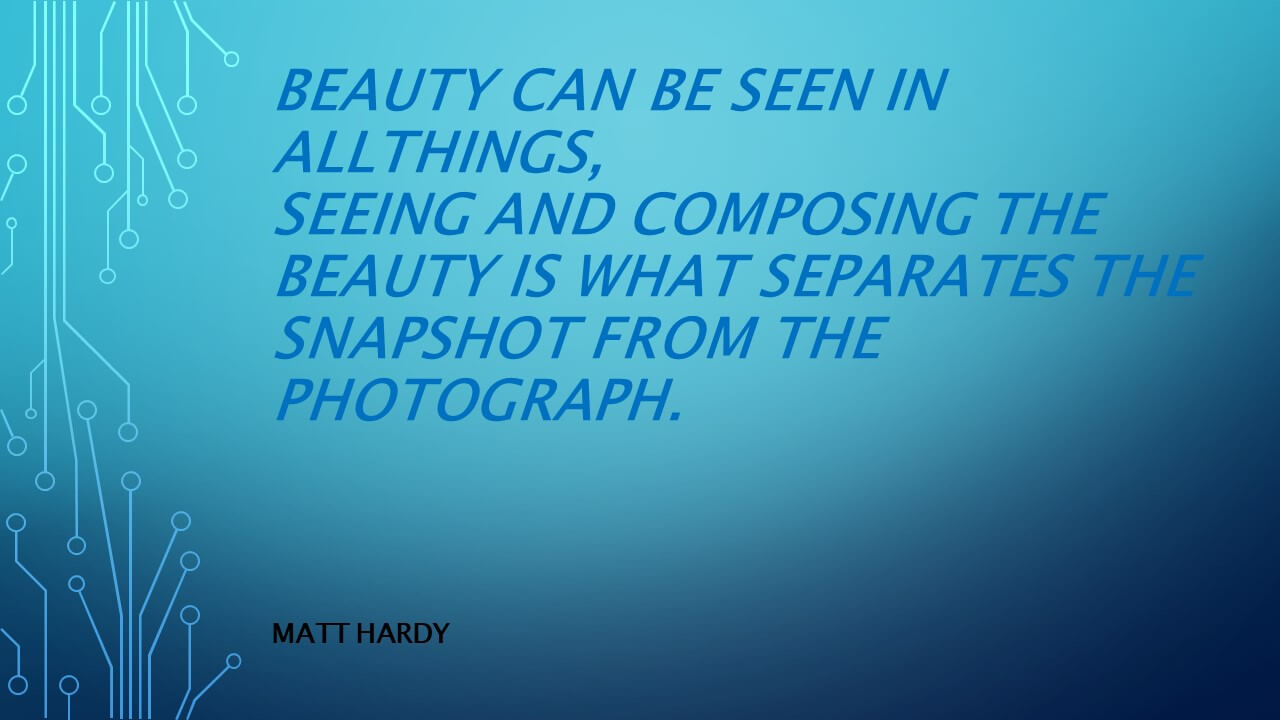 If you photograph for a long time, you get to understand such things as body language. I often do not look at people I photograph, especially afterward. Also when I want a photo, I become somewhat fearless, and this helps a lot. There will always be someone who objects to being photographed, and when this happens, you move on.

The golden rule is working fast. As for framing, composition, focus – this is no time to start asking yourself questions: you just have to trust your intuition and the sharpness of your reflexes.

Photography is a reality so subtle that it becomes more real than reality.

You don’t make a photograph just with a camera. You bring to the act of photography all the pictures you have seen, the books you have read, the music you have heard, the people you have loved.

Photographers deal in things which are continually vanishing and when they have vanished there is no contrivance on earth which can make them come back again. 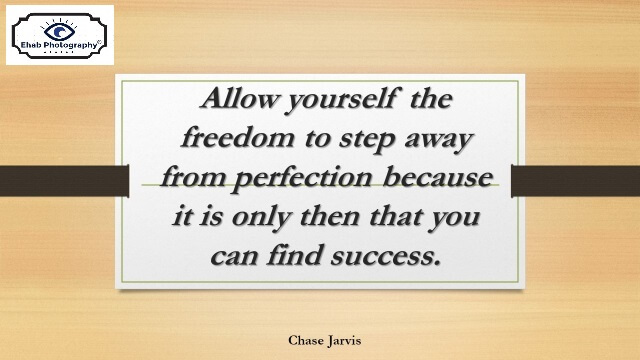 Which of my photographs is my favorite? The one I’m going to take tomorrow.

When people look at my pictures, I want them to feel the way they do when they want to read a line of a poem twice.

Photography is the story I fail to put into words.

A portrait is not made in the camera but on either side of it.

Photography can only represent the present. Once photographed, the subject becomes part of the past. 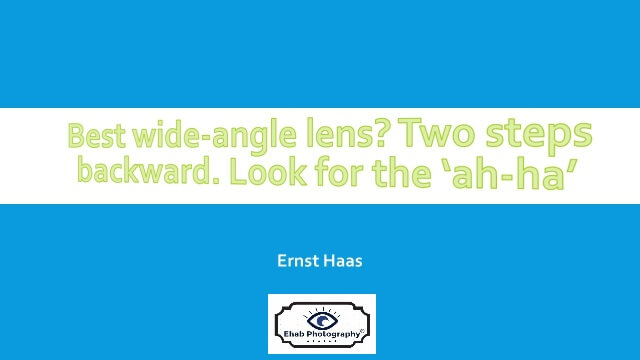 If you can smell the street by looking at the photo, it’s a street photograph.

A camera alone does not make a picture. To make a picture you need a camera, a photographer and above all a subject. It is the subject that determines the interest of the photograph.

To me, photography is the simultaneous recognition, in a fraction of a second, of the significance of an event.

My interest in photography is not to capture an image I see or even have in my mind, but to explore the potential of moments I can only begin to imagine.

To me, photography is an art of observation. It’s about finding something interesting in an ordinary place… I’ve found it has little to do with the things you see and everything to do with the way you see them.

The camera is an instrument that teaches people how to see without a camera.

If you enjoy the site, do not forget to subscribe, we will only inform you when a new article is posted.

Written By
Amin Hashem
More from Amin Hashem
Photoshop offers a number of selection tools and commands to select your...
Read More