Modulated Transfer Function (MTF) chart can be useful references when researching, comparing and purchasing a lens. MTF chart is a measurement of the optical performance potential of a lens and can give you a better understanding of the optical quality of various lenses. Using an MTF chart is the preferred method for studying lens optical performance as they use theoretical equations to plot a performance graph and don’t rely on subjective opinion, subject matter, camera features, software or other factors.

They can be obtained from websites of well-known lens manufacturing like Canon and Nikon for their produced lenses. Other sources where you can find MTF charts for lenses are the optic testing website like lenstips and DXOMark. The latest site also provides an evaluation score of the lens-camera combination test results.

It is comprised of two parts: Resolution and Acutance. They are equally important and thus affect the overall perceived sharpness.

It is the quality of transition between edges in an image frame. If it is not sharp and sudden, it’ll make the image appear a little soft.

It stands for the amount of fine detail that a lens is capable of transmitting.

It stands for the ability of a lens to distinguish between different light intensities (e.g. blacks and whites).

A defect in the lens caused by a deviation from spherical curvature, which results in distorted images, as light rays are prevented from meeting at a common focus.

It is a common optical problem that causes a flat object to appear sharp only in a certain part(s) of the frame, instead of being uniformly sharp across the frame.

What is MODULATION TRANSFER FUNCTION (MTF)?

Lens manufacturers came up with objective methods to measure lens performance in controlled lab environments. Since no lens is perfect in transmitting light, MTF can be quite useful in quantifying the loss of both contrast and resolution. Acutance does not apply here because we are not talking about our perceived sharpness.

One of the advantages of MTF is that it is capable of providing plenty of useful information in a single chart like the following:

How MTF is measured

By photographing a standard test target with a dimension of the full frame and pattern that containing lines that are 100% black with 100% white spaces of varying widths between them. The pattern of repeating lines sets are drawn sagittally (parallel to the diagonal of the image format) and meridionally (at right angles to the sagittal lines) through the exact center of the area that is photographed, The MTF is usually measured for a fixed line frequency (usually 10 lines per mm and 30 lines per mm). As shown in the following figure:

How to read  an MTF chart

MTF graphs are plotted on two axes: the horizontal (X) axis represents the distance in millimeters from the center (‘0′ point) of the image, while the vertical axis represents contrast and has a maximum value of 100% or 1. The length of the X-axis depends on the image format, with the 35mm format axis measuring approximately 21.5mm (half the diagonal of the frame), the APS-C format measuring roughly 14mm and Four-Thirds format at 11.25mm.

The MTF data for each lens is normally provided for two spatial frequencies: 10 lines/millimeter and 30 lines/millimeter, which are shown in different colors. For each spatial frequency, the MTF is usually plotted for two lens apertures, the maximum aperture and stopped down to f/8. The solid lines on the plot indicate the performance of the lens for the sagittal lines (parallel to the diagonal of the frame), while the dashed lines relate to the meridional lines (perpendicular to the sagittal lines).

A sample chart is shown below that is provided by the lens manufacturer with a key of the 8 drawn curves. 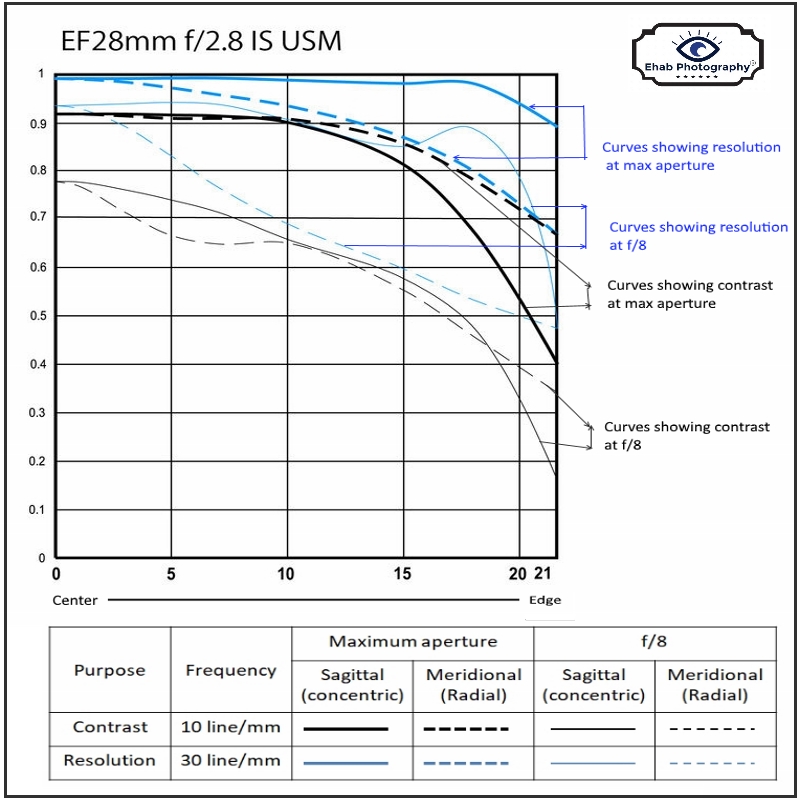 FINDING THE “SWEET SPOT” OF A LENS

The website Lenstips offers another type of MTF charts. The figure below shows the MTF-50 for various apertures for Canon EF 85 mm f/1.8 USM. 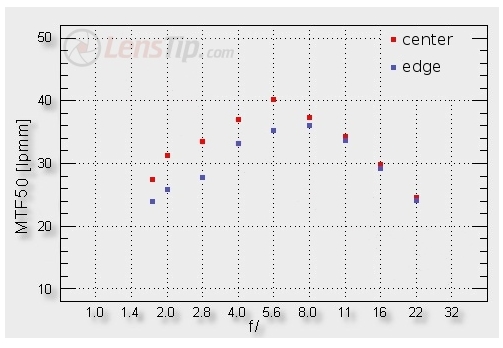 The aperture corresponding to the maximum MTF is the so-called “sweet spot” of a lens since images will generally have the best sharpness and contrast at this setting. From the above chart it clear that the sweet spot is at f/5.6 in the center and f/8 at edge.

MTF charts offer a clear way to give users a good idea of the relative optical quality of one or more lenses. While slightly complex and non-intuitive at first, if you understand a few basics about them, it becomes a lot easier to digest an MTF chart’s information and apply it to your present and future lenses.

While the contrast and resolution readings on MTF charts give a good idea of important aspects of a lens’ likely image quality, they obviously cannot give a user all he or she needs to know about how well-suited a lens is to them. Regardless of MTF results, users have to consider other factors when thinking about a lens purchase: how important a particular focal length lens will be in their mind, a lens’ size/weight/portability, how well-balanced a lens’ handling is, how easily or readily it manually focuses, how close a lens focuses, whether a zoom lens’ range would be ideal or limit in some way, whether its maximum aperture is well-suited to the type of work he or she anticipates using it in, whether or not it offers features with real-life benefits like Image Stabilization and, of course, price.

Thanks for reading the article, hope you found what you are looking for. If you have any question or need more information about the subject, please drop your query in the box below, I’ll be glad to reply. If you like the site, don’t forget to subscribe, we will inform you only if a new article is posted.

Written By
Amin Hashem
More from Amin Hashem
The concept of light metering is often a point of confusion for...
Read More