Canon has recently announced its first RF mount APS-C sensor cameras: Canon EOS R7 and R10. Although Canon already had mirrorless APS-C cameras with their EOS-M mount series, these new cameras share the same RF mount as their full-frame counterparts and can utilize any RF lens.

Canon EOS R10 is a suitable option for travel, street photography, lifestyle, and vloggers, whereas the Canon EOS R7 is designed for serious enthusiasts particularly sports and wildlife photographers.

The EOS R10 is priced around the level of the core ‘Rebel’ cameras, while the EOS R7 has the price and features to put it a little above EOS 90D. So, if these two cameras represent the future, the following is a comparison between them. 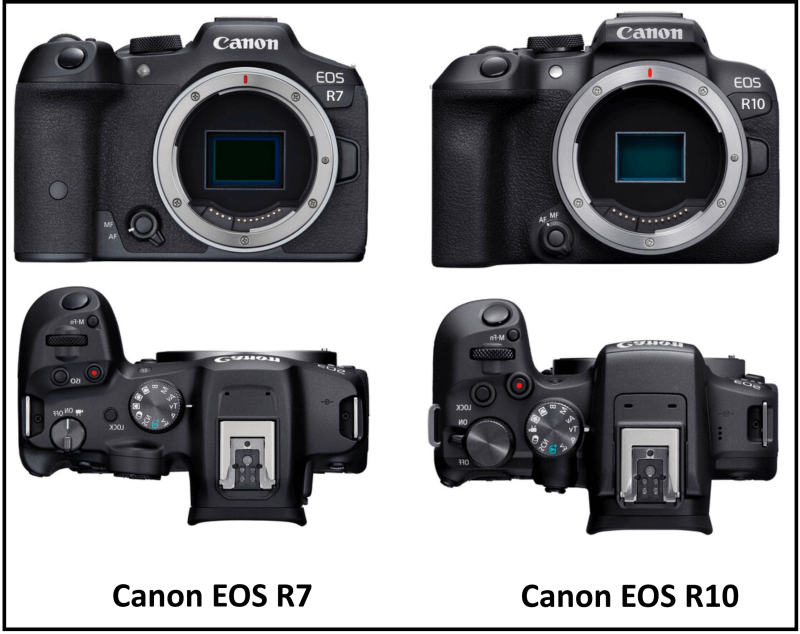 Neither camera is particularly large; The R7 is larger and heavier than the R10, but the EOS R10 is the more portable of the two, their dimensions (W x H x D), and weights are:

The EOS R7 has a slightly more advanced control layout. Note the additional dial on the back and the dedicated ISO button on the top of the EOS R7. Advanced photographers who want quick manual controls will appreciate those features; the EOS R10’s layout is still reasonably advanced, including a dedicated AF-On button and joystick that are usually found only on higher-end cameras.

The rear screen is fully articulated and touch-sensitive on both products, but the R7 has more resolution: 1.62M vs 1.04M dots on the R10. 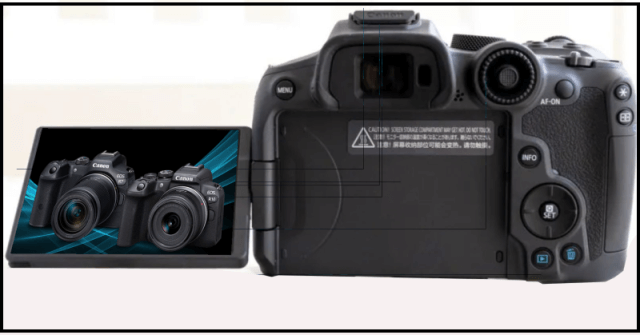 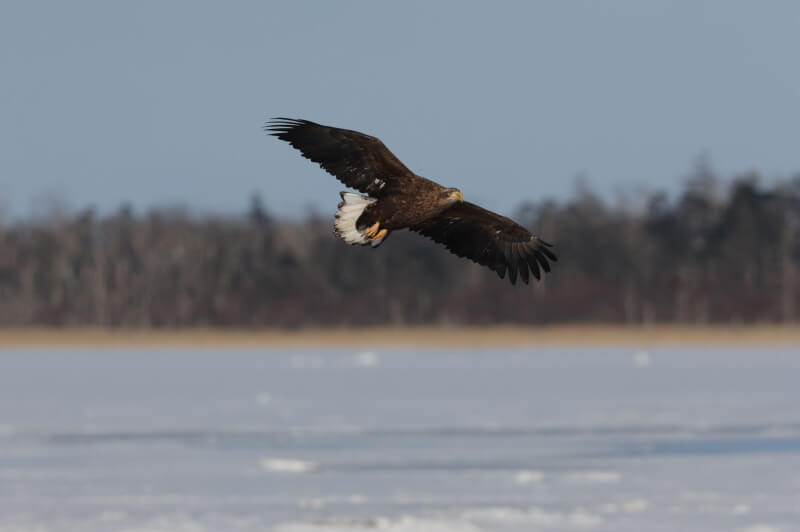 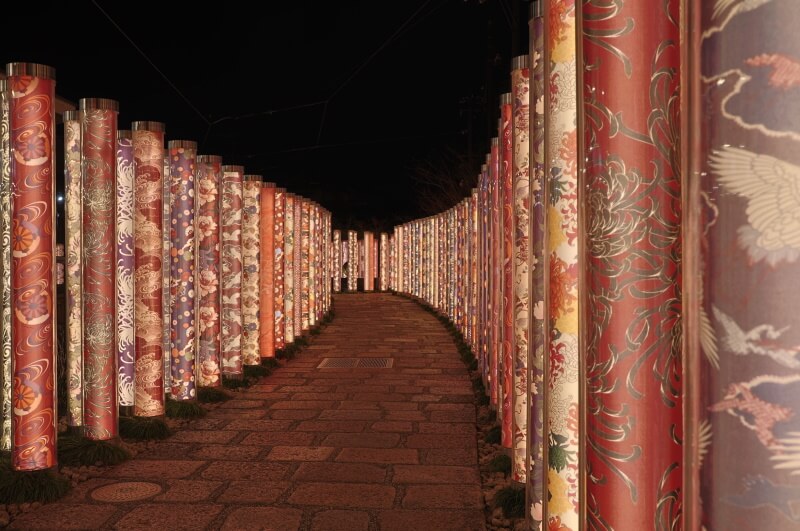 Both cameras include an advanced autofocus system, it includes Canon’s Dual Pixel AF II technology and a deep learning algorithm that can track various subjects automatically including humans, animals, and vehicles.

Two differences are found between them: low light sensitivity and the total number of AF points.

A Pre-shooting mode is available, which allows the two models to capture images half a second before the shutter button is pressed all the way down. 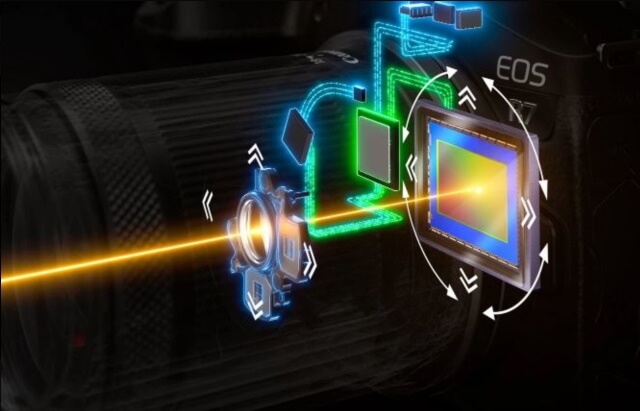 One of the major differences between the two cameras is that the R7 includes in-body image stabilization (IBIS). The camera can combine IBIS with optical stabilization, as well as digital stabilization in video mode (Movie Digital IS).

The IBIS in the R7 also enables another neat trick, horizon correction. This is a feature that is activated via the menu and it uses the sensor’s ability to move to correct a sloping horizon. You can see its impact in the viewfinder and on the screen on the back of the camera.

The R10 doesn’t have sensor stabilization, so you must rely on lenses with optical stabilization. The Movie Digital IS mode is still available and works in conjunction with IS on the lens.

Both R7 and R10 can record 4K/30p with oversampling (which means high quality), using the full width of the sensor (meaning no crop). Canon says the R7 can record 4K 30p (HQ quality) or crop 4K/60p for approximately 60 minutes with a temperature of 23˚C or lower. The R10 has a similar rating with 50 minutes.

The R7 has a microphone input and headphone output (3.5mm). The R10 lacks the headphone option. Both come with the new multi-function accessory shoe that is compatible with digital audio on select microphones.

In the new panning scene mode, R7 & R10 cameras can detect the position of the subject. Unlike in-lens panning, detection IS, only accounts for horizontal movement and shuts off the IS operation on that axis. The new Panning Scene Mode will activate horizontal correction when needed to help keep the subject in the same area of the composition.

Many previous cameras have Focus Bracketing that allows you to record a series of images with incremental shifts in the focus distance. The EOS R7 and EOS R10 now add the option for Depth Composite, which combines these images in the camera instead of having to post-process them.

Both cameras accept SD UHS-II cards, but the R7 has two slots as opposed to one on the R10.

Furthermore, the card slot on the smaller camera is found in the battery compartment, whereas the R7 has its own dedicated area for the memory cards, on the side. 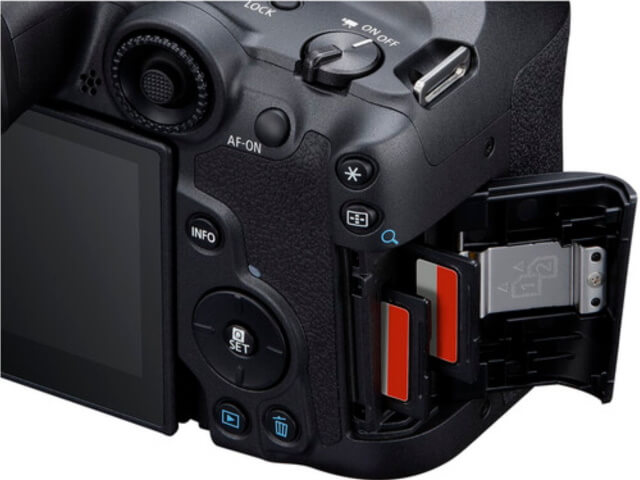 The R7 has a weather-sealed design, but R19 lacks this feature

Both R7 and R10 have Wi-Fi and Bluetooth capabilities.

The two cameras use a different batteries:

Both cameras have a USB C port that can be used to charge the battery.

If you’re planning to use this camera for advanced or even pro-level sports and wildlife photography, the EOS R7 will be the best option. The higher resolution lets you put more pixels on a distant subject; while the bigger buffer lets you take longer bursts of images before the camera slows down. Other features like dual card slots and better weather sealing are also a plus.

On the other hand, if you are not quite interesting of photograph those subjects very often and you’re on a budget go with the EOS R10. It is still extremely capable of sports and wildlife, thanks to the high frame rate and essentially the same autofocus system as the EOS R7.

The R10 with its lower price seems the best choice for beginners or enthusiasts in search of a user-friendly product with good performance for a variety of uses The R10’s 24-megapixel resolution also isn’t too much lower than 33 MP anyway, so you still can capture the amazing landscape and other photography genres.