An endless series of articles, books, and magazines have all covered how to work with the endless variety of subjects in photography. However, there’s one aspect of the art form that doesn’t get nearly enough attention: the negative space in the frame.

Nearly all images have some amount of negative space. And this happens to be a concept used in other art forms as well! So let’s discuss how to use negative space in photography!

What is Negative Space in Photography?

Typically in photography, we focus on a particular subject or subject. The background gets less attention and is sometimes even blurred out of significance. However, when attention is paid to the space between subjects we’re in the creative realm of negative space!

Negative space has been around long before photography. It’s a concept that finds expression in painting, music, poetry, and other art forms. Space, whether visual, auditory, or something else, is essential to understanding the whole.

Negative space is very effective when using prime lenses since you’re forced to use a dynamic composition rather than changing the focal length with the zoom feature. Empty streets, a blurred out background, and the open sky become a definite part of the canvas rather than accessories to the subject.

Lastly, negative space is a storytelling feature. It can add mood to an image, especially when human elements or subjects are present. It helps declutter the frame and presents your subject with a laser-like focus so there is little chance of misinterpretation. 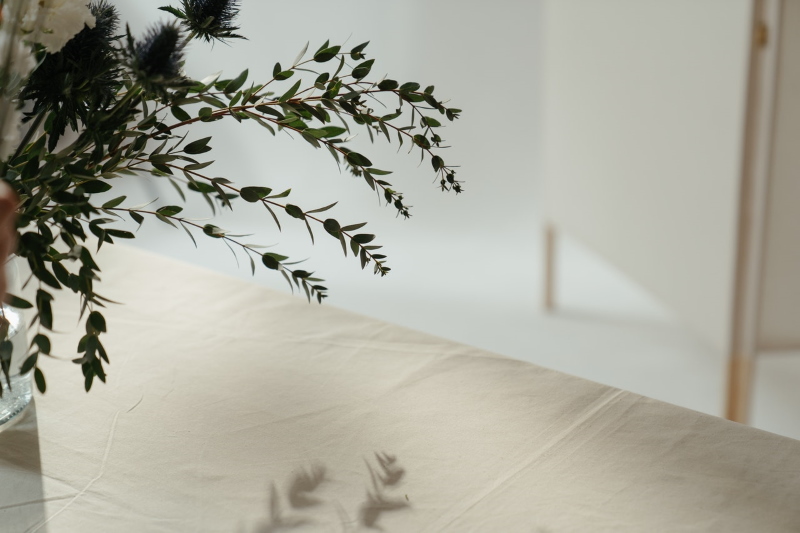 Photo by cottonbro from Pexels

Negative space is more than just “emptiness.” The empty space emphasizes the subject, especially in an uncluttered composition. Instead of a busy composition full of distracting lines and textures, one relying on negative space has more breathing room and a clear focus.

Positive space, on the other hand, is your subject, significant background textures, and other elements that you intend for viewers to intentionally take in. In a portrait, a smiling face is the “positive space,” while the gently blurred background is the “negative space.”

The interplay between negative and positive space can add dynamism that makes an otherwise uninteresting subject pop in ways playful and artistic. Even something ordinary like a person riding their bike in the city can be more interesting when a thoughtful photographer juxtaposes them with a clear sky and a long, empty bridge. 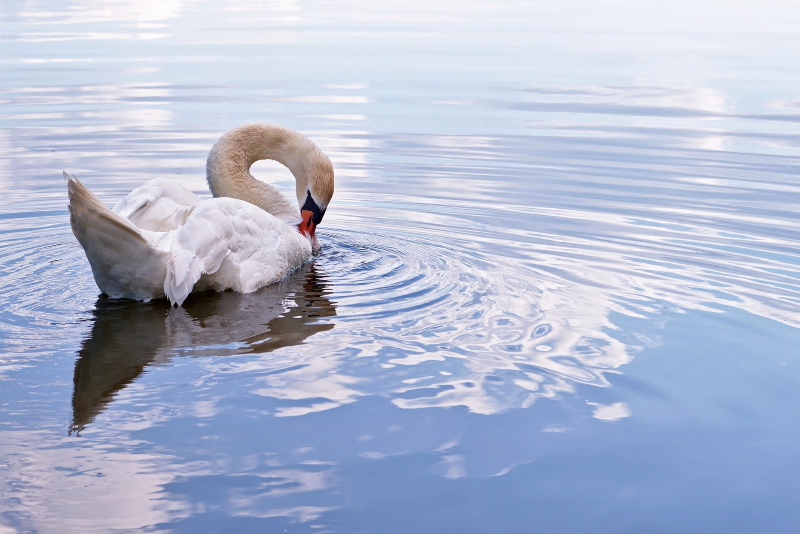 Image by Peggy Choucair from Pixabay

Landscape and architecture photography can be a real challenge to use negative space well because we’re typically creating expansive views that include several competing, sometimes contrasting elements. Leading lines, colors, shadows, and shapes all draw our attention in various ways.

However, you can focus on one prominent portion of a structure rather than the whole, such as a church spire or window. And allow the sky, a nearby wall, or other elements to act as negative space, emphasizing what you’ve picked out. Many outdoor landscapes use negative space to make a single standout feature like a barn or mountain appear small in a vast ocean of sky, water, grass, or other elements. 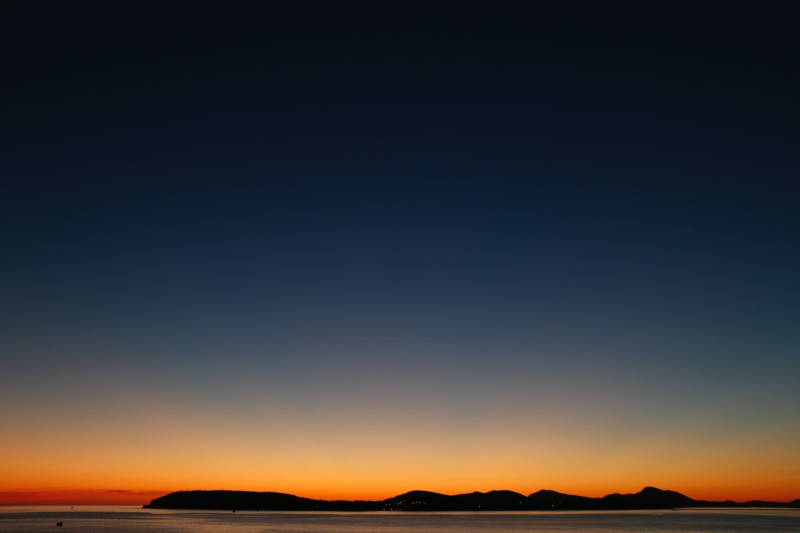 Photo by Marko Obrvan from Pexels 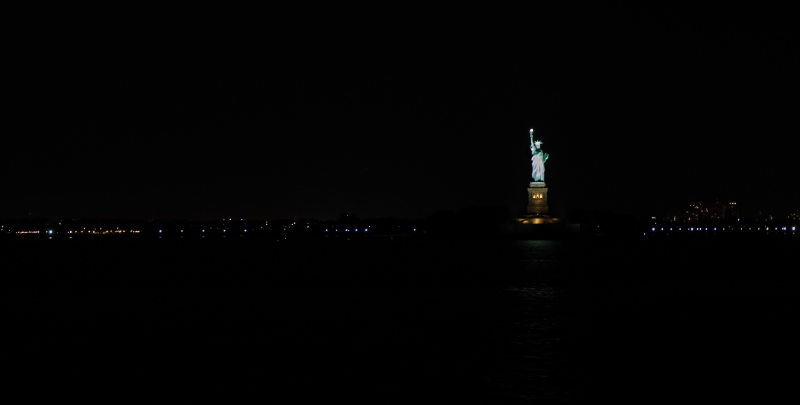 Negative space is very powerful in portrait images because the positive space (people’s faces) is so magnetic to your attention. Combining an empty backdrop with a face gives an image immense power. You may check my posts about portrait photography.

Neutral backgrounds are typically used in studio portraits for this reason. Black, grey, white, etc all help faces and expressions leap forth from a canvas!

There is a surprising amount of flexibility in the composition that comes with portraits and negative space due to the intrinsic interest we have for people. Images can be flexibly composed outside of the usual Rule of Thirds or center portrait grids and still be engaging. 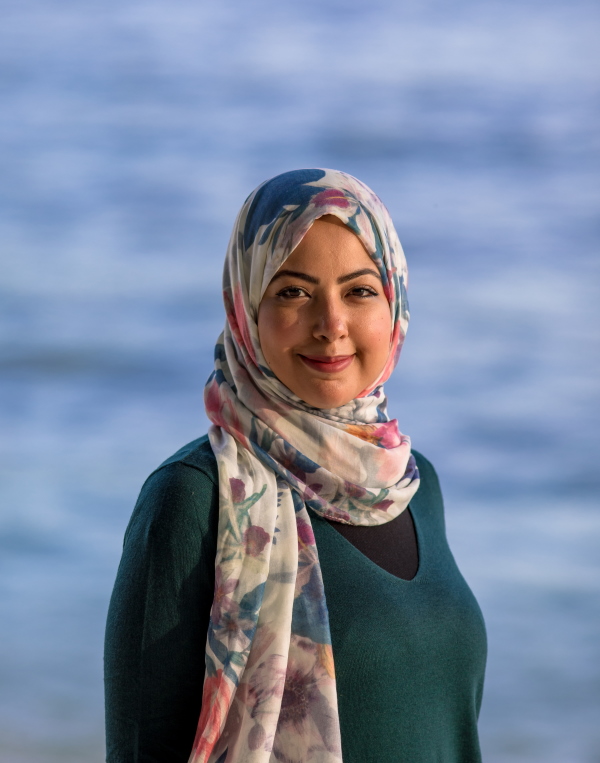 Street photography is one of the best genres for practicing the use of negative space because it’s so spontaneous. It takes a real effort to find an interesting subject and then uses negative space to highlight them.

Elements you find in the outdoors, like the sky and walls, are typically used to isolate and emphasize. However, shadows are also common and by heavily underexposing (crashing) the shadows you can create striking compositions with subjects entering or leaving the darkened areas.

Orienting your camera upward while shooting allows you to take advantage of the sky and sections of buildings even while shooting people for creative slices of negative space within the frame. 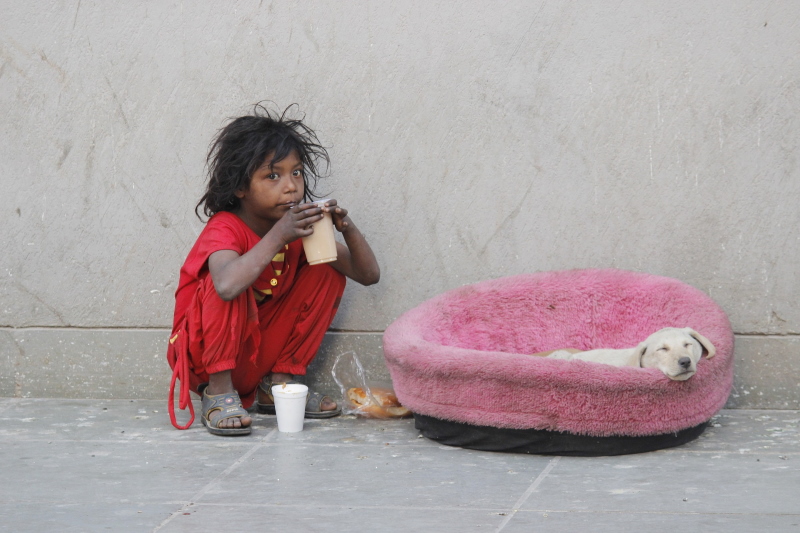 Image by Suveen Mylabathula from Pixabay 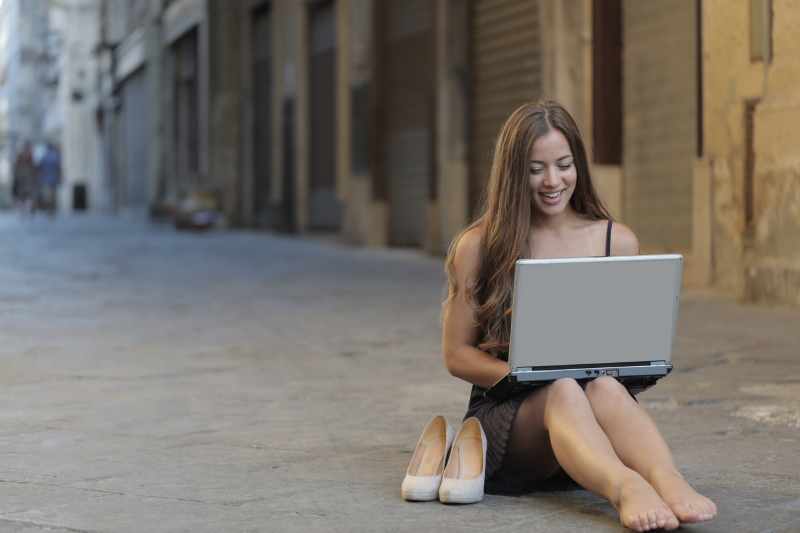 Photo by Andrea Piacquadio from Pexels

Sometimes no matter which angle you try and find on a subject the background just remains busy! Fortunately, we have another tool in our kit to minimize distractions.

Shallow depth of field is one of the most common ways to use negative space. The technique relies on opening the lens aperture wide enough for only a narrow slice of the image to be in focus.

Usually, you’ll need lenses with apertures of f/4 or below (f/2, f/1.4, etc) but this also depends on the lens focal length and distance from subject to background. When using shallow depth of field even a cluttered background will melt away to insignificance. While it’s especially popular in portraiture, shallow depth of field is used in nearly every genre, especially macro photography. 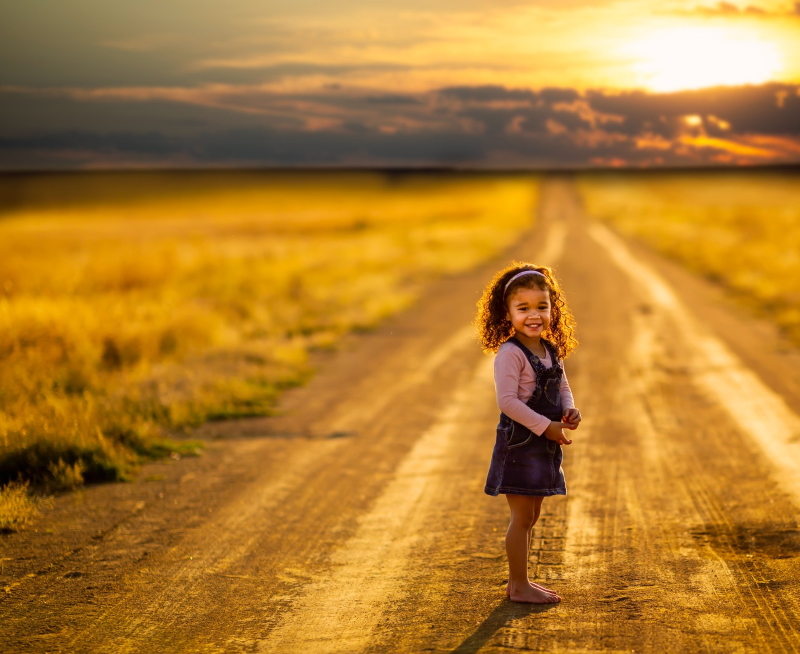 Photo by Andre Melcher from Pexels 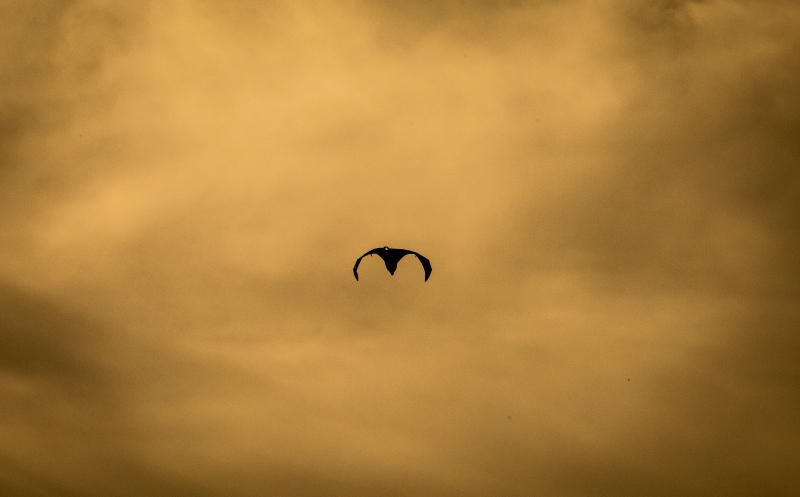 Negative space is a wonderful tool for amplifying the mood of an image. Vibes like stillness, peace, freedom, aloneness, and spaciousness lend themselves particularly well to the creative use of negative space.

The sense of scale that human subjects provide within the frame can also help carry a story or set the tone for an artistic image. It makes it that much easier for the viewer to imagine themselves within the canvas you’ve created.

Negative space also adds or subtracts weight from the positive space (subjects) depending on their type, orientation in the frame, and the amount of negative space present. A bird sitting alone on a branch that juts out into the sky may look either powerfully present and alert or small and insignificant depending on how you compose using negative space! 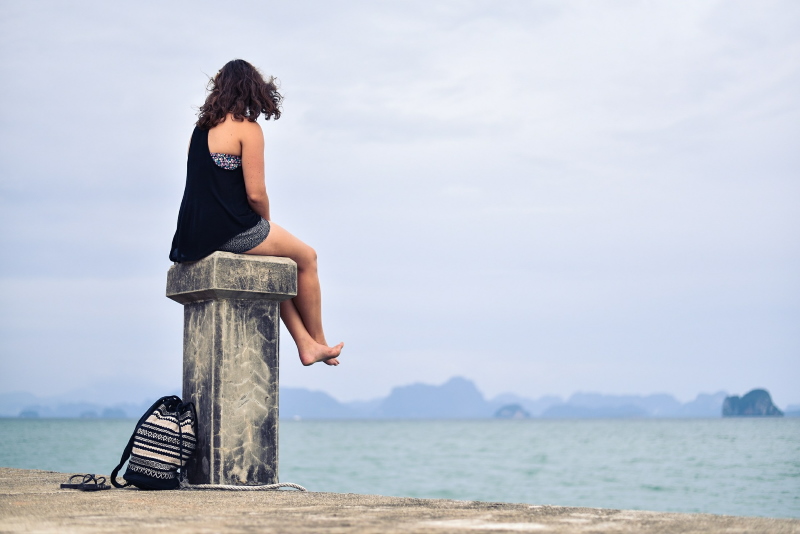 Image by SnapwireSnaps from Pixabay 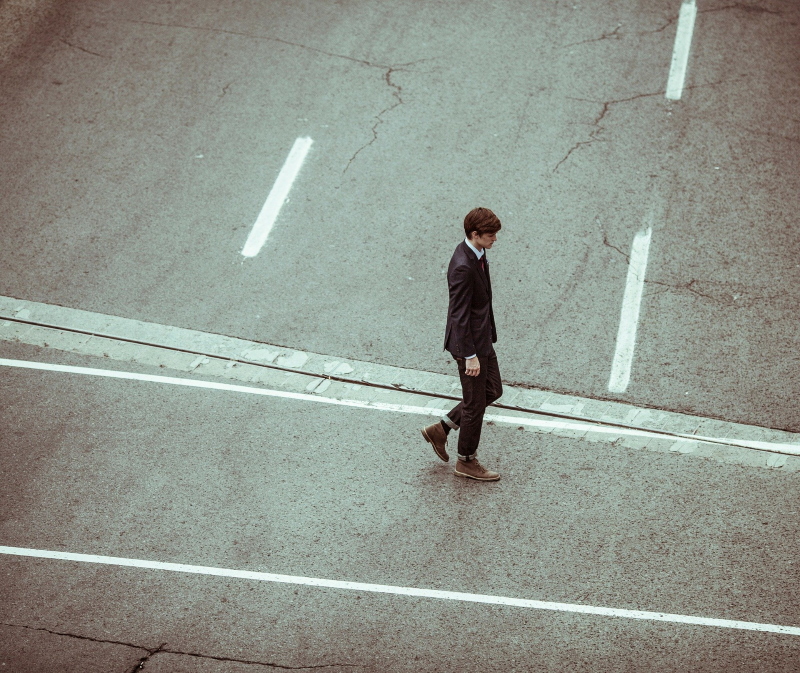 Image by Free-Photos from Pixabay

While nearly every photographer makes use of negative space instinctively not everyone takes the time to really consider how an image is strengthened by the elements of space in the frame. I suggest not only intentionally shooting to make use of negative space but study images that make good use of it to better understand this core artistic concept!

Written By
Ehab Amin
More from Ehab Amin
If your goal is to become a great city travel photographer, then...
Read More