One of the basic requirements for shooting good still photos and videos is stabilizing your camera to prevent unintentional shakes and movements that will run your photos. Preventing camera shake becomes difficult and nearly impossible when shooting a long shutter speed still photo, or shooting video footage while you are walking or moving.

Using a tripod to stabilize the camera can help in some situations, but you cannot use it if you are shooting video while moving. Here comes the magnificent innovation of gimbals.

What is a gimbal?

A gimbal is a handheld mechanical device that allows you to capture stabilized photos and footage from your camera while moving. It is handy for shooting stills from tricky angles and is essential for videographers. Think of it as the best way to hold a camera steady without a tripod. Although a tripod will help you to shoot smooth footage, it can’t offer the same speed and versatility to move your camera as a gimbal can. For this reason, many wildlife and sports videographers choose to use a gimbal to stabilize their camera and track moving subjects.

Gimbal allows your digital camera to rotate smoothly along an axis. There are three types of gimbals today; they differ in the number of axes they control. For example, the 1-axis gimbal such as Junior Single-Axis Gimbal Stabilizer can help in maintain your phone at a vertical or horizontal level only. The 2-axis gimbals such as Zhiyun Smooth X2 will control camera shake on two axes (Roll, Yaw)

These days, 3-axis gimbals are the most common type. They stabilize your camera while you tilt, pan and roll, and help you to film smooth footage while you’re on the move. 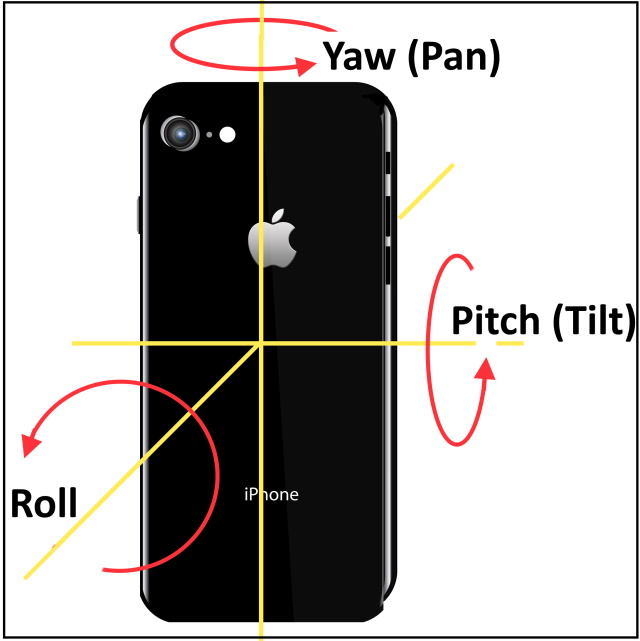 Gimbal consists of two parts: On the bottom, there’s a handle, which you hold much as you do a selfie stick. The handle usually includes a mix of buttons, joysticks, and wheels. The gimbal sits on top of the handle and looks like an arm with a gripper that holds your phone or attaches to a built-in camera. When you wiggle the handle, the phone or camera stays in place.

Features to look for when buying a phone gimbal

A smartphone gimbal not only stabilizes your smartphone camera but also elevates your photography and videography results. Many of them have built-in features such as Bluetooth connection to your mobile, which allow the remote control of your camera functions with the help of a phone app from your gimbal. The following are the most important features you have to choose from them.

Most gimbals have either 2-axis or 3-axis. A two-axis gimbal corrects a camera that is pitching forward and back or rolling from side to side. It won’t correct unwanted movements in the yaw axis.

A three-axis gimbal, on the other hand, does correct unwanted shakes in the yaw axis, resulting in even more stable footage.

While most gimbals don’t weigh more than a couple of pounds, even two or three pounds can get heavy if you have to hold it up for extended periods of time. As a rule of thumb, the lighter the gimbal, the better. However, make sure you’re not sacrificing performance just to save half a pound.

A gimbal with an extra selfie stick or extended arm, and/or tripod legs will give you more additional benefits. A gimbal with a magnetic mount allows the phone to be quickly attached and removed from the gimbal

Battery-powered gimbals come in one of two ways. Some models use standard alkaline batteries which have to be replaced at regular intervals, while others use rechargeable lithium-ion batteries, but these tend to have shorter battery life.

Most smartphone gimbals come with installed utility software. This software can be a powerful tool, enabling you to get more out of not only your gimbal but your camera as well.

This software may work with a particular operating system, so make sure your phone gimbal is compatible with your smartphone.

There are well-known names when it comes to gimbals such as DJI and Zhiyun, they also offer good apps to go with their hardware. 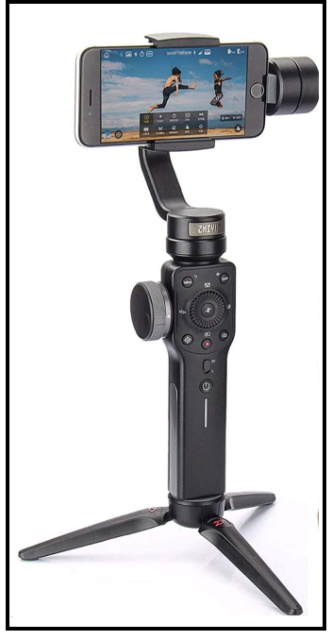 The Smooth-4 Smartphone Stabilizer from Zhiyun-Tech, in black, has been designed to provide cine-style functions to content creators using their mobile phones for video capture. When used with the free, downloadable ZY Play app, the control panel enables Android and iOS users to control both gimbal and smartphone camera functions such as focus, zoom, time-lapse, and still photo settings.

The Smooth-4’s controls are ergonomically laid out and better labeled with icons. It has a larger focus/zoom wheel, for quickly grabbing the action, multiple time-lapse functions, and object tracking. With the ability to support smartphones weighing up to 7.4 oz and measuring up to 3.35″ high, the Smooth-4 is compatible with almost any mobile phone.

The Smooth-4 offers 300° of the pan and 240° of tilt and roll for capturing your action shots. Choose between Pan-Following, Locking, Full-Follow, or the full-speed PhoneGo mode to adjust your level of axis control while shooting.

Powered by rechargeable lithium-ion batteries, the Smooth-4 features a maximum runtime of up to 12 hours. A USB Type-C port on the handgrip enables you to add a separately available power pack to extend your shooting time even further.

The Zhiyun-Tech Smooth-4 Smartphone Stabilizer includes a mini tripod, carrying case, and a USB cable. A single 1/4″-20 female thread on the handgrip bottom can be used to mount the stabilizer onto the included tripod. 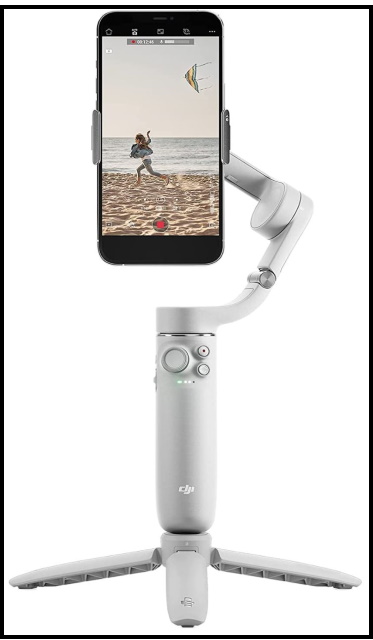 The DJI OM 5 smartphone gimbal stabilizer is easy to balance and fold down, and it features an extension rod that provides an additional 8.5″ length to help design more creative shots. It retains the handy foldable magnetic smartphone mount, and it comes in a metal design with metal joints for improved durability and ergonomics.

In addition to using the joystick controls on the handle, you can also use hand gestures to control the gimbal to track your movement, take a selfie, or start/stop your smartphone camera, so you don’t have to press the record button or touch any controls. It can also automatically track body shapes to track human subjects.

You can mount any smartphone up to 3.3″ wide in its phone cradle, and its magnetic phone holder and smartphone magnetic ring allow for simple and fast mounting and unmounting. The built-in battery runtime is approximately 6.4 hours, and it takes approximately 1.5 hours to charge using the included USB Type-C cable.

The bottom of the gimbal handle features a 1/4″-20 mounting thread to mount the gimbal on the included grip tripod or another accessory. A storage pouch and wrist strap are also included with the gimbal. 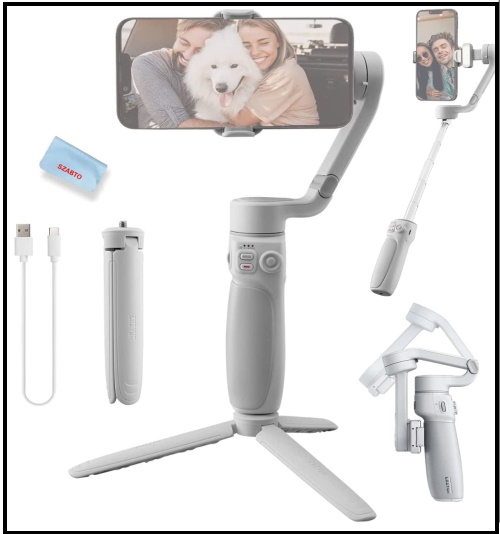 The Smooth-Q4 Smartphone Gimbal Stabilizer offers many gimbal modes and recording functions with a built-in extension rod for content creators who are on the move. The Smooth-Q4 can support smartphones up to 9.9 oz, its companion Android/iOS smartphone app features a slew of templates, editing tools, and control functions to fulfill your creative vision.

Switching between landscape and portrait modes is as easy as pressing a button, so you can transition from filming panoramic scenery to filming a TikTok.

Operate the Smooth-Q4 with just one hand, thanks to the improved onboard controls and comfortable handgrip. Joysticks, buttons, and wheels control functions like gimbal mode and video recording.

Various indicator lights on the gimbal display the current mode or power level. A mini tripod can be attached to the bottom of the Smooth-Q4 for stabilized, hands-free setups.

The built-in battery supply powers the device for up to 15 hours and a single USB Type-C input can recharge it in 2.5 hours or serve as a firmware update port. 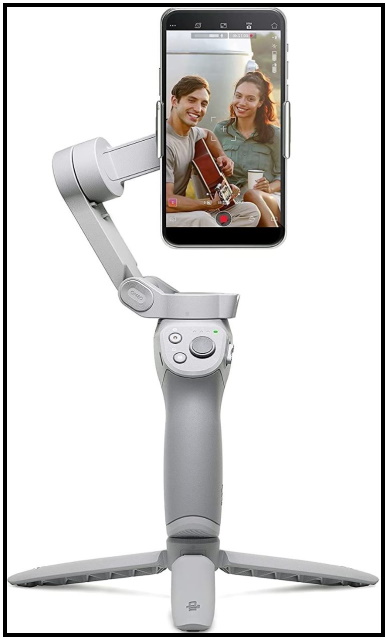 The DJI OM 4 SE smartphone gimbal is easier to balance and fold down. Thanks to its magnetic smartphone mount. The gimbal is controllable with the DJI Mimo app (available for iOS or Android devices), and supports Bluetooth 5.0. You can mount any smartphone up to 3.3″ wide in its phone cradle, and its magnetic phone clamp allows for simple and fast mounting and unmounting.

In addition to using the joystick controls on the handle, you can also use hand gestures to control the gimbal to track your movement, take a selfie, or start/stop your smartphone camera. It can also automatically track body shapes to track human subjects.

The built-in battery runtime is approximately 15 hours, and it takes approximately 2.5 hours to charge using the included USB Type-C cable. There is a USB Type-A power output on the back of the handle to charge your phone or other accessories while operating the gimbal. 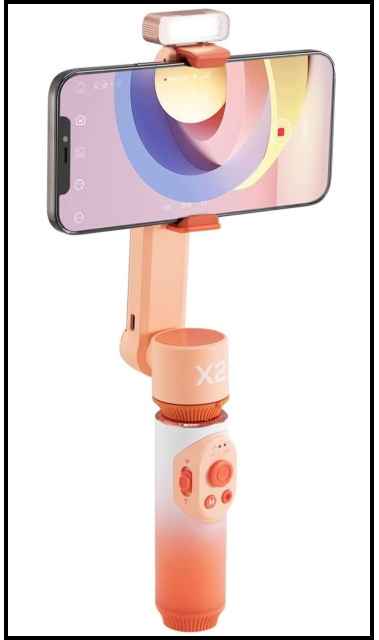 The orange Smooth-X2 Smartphone Gimbal Combo Kit from Zhiyun Tech has been redesigned to be more compact and lightweight than its predecessor, and it is even more compact with its folding design.

A telescoping pole on the bottom extends approximately 10.4″ in five increments to extend it away from you for high-angle or selfie shots. It can rotate 360° and allows you to position your phone horizontally or vertically for standard or portrait shots.

This user-friendly gimbal comes with a companion iOS/Android app, which highly expands your capabilities. The app offers slow motion, time-lapse, panorama, and other creative features, and it enables you to use gesture control and track a subject automatically after getting the subject in the frame.

After your phone is attached, the orientation is easily switchable at the press of a button. The integrated battery provides 1.5 hours of average runtime and even up to 3.5 hours in some applications on standby.

What Is A Gimbal Stabilizer? – Explanation And Recommendations

How To Shoot Video With Your Smartphone