What is the difference between Contrast and sharpness?

Contrast is a term that describes the relative difference between light and dark areas. A low-contrast image looks “faded” or “washed out”. A high-contrast image is often said to have more “pop”.

Sharpness is about the edges in the image and making them more or less “defined”. A more defined edge is a sharper image. Image sharpening works by increasing contrast along the edges of your image. Photoshop considers an edge to be an area where there’s a big, sudden change in brightness between neighboring pixels.

it’s important to note that sharpening an image is not the same thing as adjusting the focus. Photoshop can not go back in time and change the focus point of your lens. A blurry image will always be blurry no matter how much sharpening you apply. Sharpening is about making the in-focus areas of your image look sharper.

How to sharpen the image in photoshop 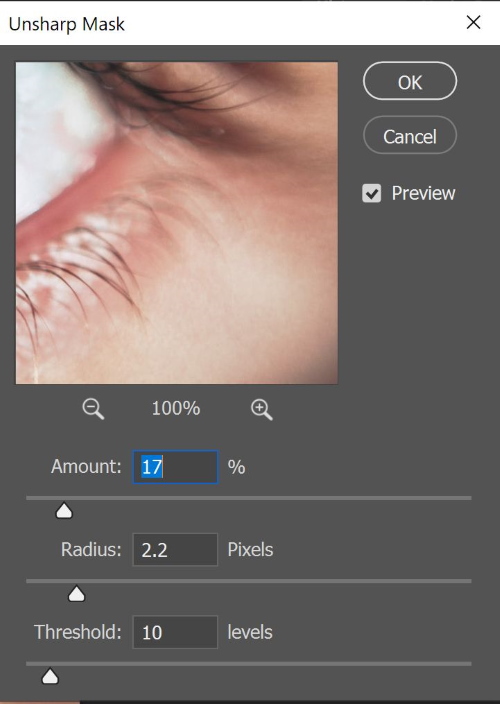 It controls how much to increase the contrast of pixels. For high-resolution printed images, an amount between 150% and 200% is usually recommended.

It determines how different the sharpened pixels must be from the surrounding area before they are considered edge pixels and sharpened by the filter. For example, a threshold of 4 affects all pixels that have tonal values that differ by a value of 4 or more, on a scale of 0 to 255. So, if adjacent pixels have tonal values of 128 and 129, they are not affected. To avoid introducing noise or posterization try experimenting with Threshold values between 2 and 20. The default Threshold value (0) sharpens all pixels in the image. 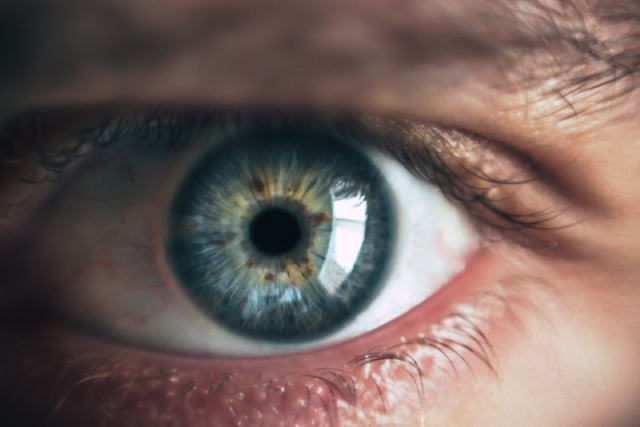 Photo by Victor Freitas from Pexels

In order to keep the color unchanged, desaturate the layer (Shift + Ctrl + U)

Click (Filter > Sharpen > Unsharp Mask), and use the Amount, the Radius, and The Threshold sliders to adjust the sharpness.

Change the blending mode of the filter to “Luminosity”

Photo by Lisa Fotios from Pexels 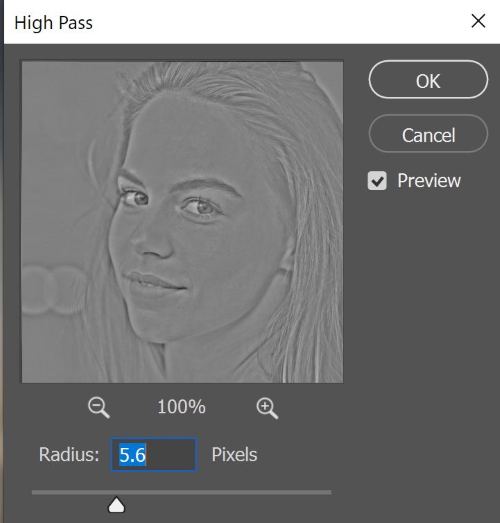 Because sharpening an image is all about increasing edge contrast. So, before we can increase contrast along the edges, we first need to find those edges. High Pass filter is an edge-detection filter. It looks for edges in the image and highlights them. Areas that are not an edge are ignored. High Pass works by filling the image with a neutral gray color. It then looks for edges in the image (areas with a sudden change in brightness between neighboring pixels) and highlights them by making the light side of the edge lighter and the dark side darker. Non-edge areas remain unaffected.

The Radius value affects the width of the edge. It controls the number of pixels extending outward from the edge. In other words, a Radius value of 1 pixel would mean that the High Pass filter is highlighting only a single-pixel along either side of an edge.

Once the edges are highlighted, we can then combine the High Pass results with one of Photoshop’s contrast-boosting blend modes to easily increase edge contrast without affecting other parts of the image. The two most commonly used blend modes for sharpening images with High Pass are “Overlay” and “Soft Light”. Overlay produces a higher contrast effect, resulting in a stronger amount of sharpening, while Soft Light gives you lower contrast and more subtle sharpening. 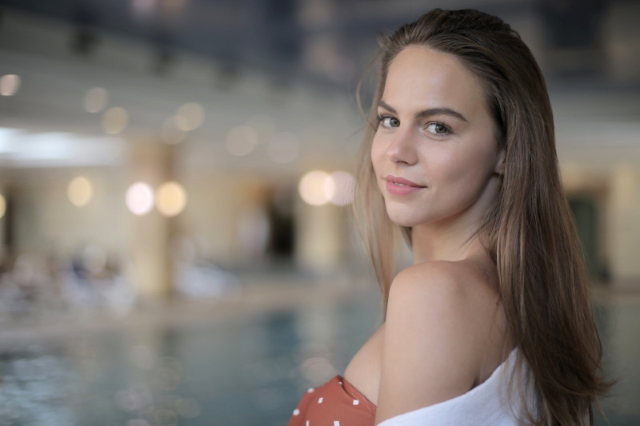 Photo by Andrea Piacquadio from Pexels

Repeat the steps from the previous example up to step 4

Adjust the Radius slider to define the edges.

From the layer panel, double click the filter blending options 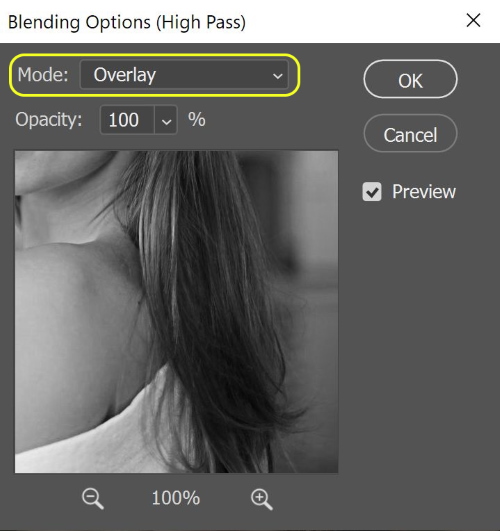 To apply a selective sharpness to different areas of the photo, we use a mask to limit the applied sharpness setting to the hair. (Black mask with the hair selection in white color)

To apply another value of sharpness setting to the women’s eyes and lips.

Duplicate the layer (Ctrl + J), add a new mask to revels the eyes and the lips (White), and hide the rest of the photo (black)

Open the high pass filter again and redefine the edges of the eyes and the lips, and change the blending mode to “Overlay”, or “Soft Light”

Photo by Arun Sharma on Unsplash

Smart Sharpen filter is better than Unsharp Mask; because the Smart Sharpen filter can detect edges, so it sharpens edges without sharpening noise. It also creates thinner, less noticeable halos around edges, resulting in a cleaner image. In addition, Smart Sharpen includes controls for fading the edge contrast in both the highlights and shadows, so your image looks sharper without losing detail. 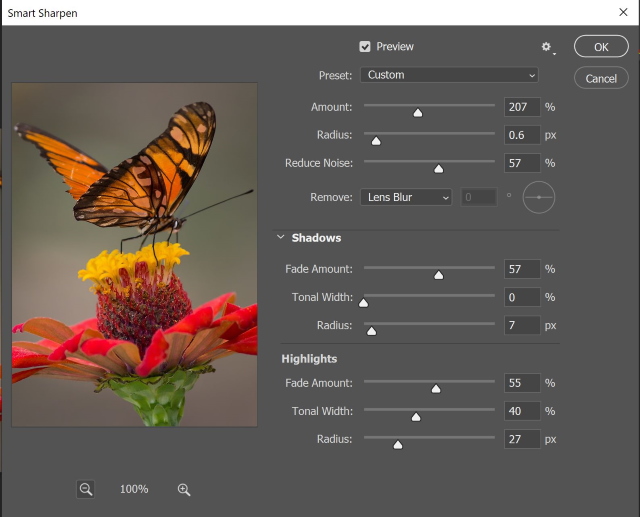 Amount: Sets the amount of sharpening. A higher value increases the contrast between edge pixels, giving the appearance of greater sharpness.

Radius: Determines the number of pixels surrounding the edge pixels affected by the sharpening. The greater the radius value, the wider the edge effects and the more obvious the sharpening.

Remove: Sets the sharpening algorithm used to sharpen the image.

Adjust sharpening of dark and light areas using in the Shadow and Highlight tabs. (Click the Advanced button to display the tabs). If the dark or light sharpening halos appear too strong you can reduce them with these controls, which are only available for 8‑bits and 16‑bits-per-channel images:

Fade Amount: Adjusts the amount of sharpening in the highlights or shadows.

Tonal Width: Controls the range of tones in the shadows or highlights that are modified. Move the slider to the left or right to decrease or increase the Tonal Width value. Smaller values restrict the adjustments to only the darker regions for shadow correction and only the lighter regions for highlight correction.

Radius: Controls the size of the area around each pixel that is used to determine whether a pixel is in the shadows or highlights. Moving the slider to the left specifies a smaller area, and moving it to the right specifies a larger area. 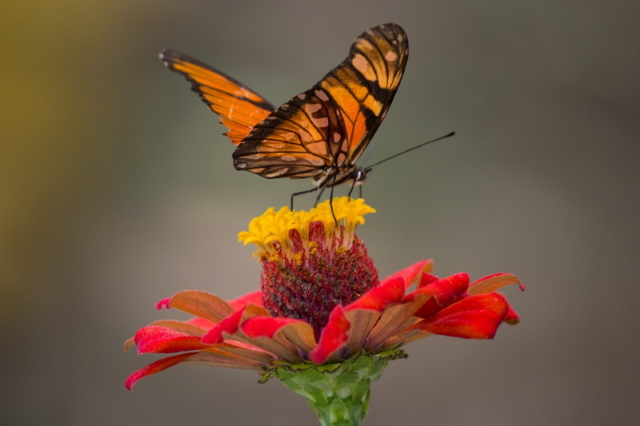 Photo by Leonardo Jarro from Pexels

The steps of this example are the same as mentioned in example 1, except we use the smart sharpen filter instead Unsharp Mask filter

Written By
Amin Hashem
More from Amin Hashem
When editing your photos after going back home, you may discover that...
Read More