You had probably taken some shots, and got a detail-obscuring blur due to the camera shaking. In addition, it could happen also when you are shooting a video while you are moving, and the result is too much haziness, thus reducing the sharpness of the video. Hence, image stabilization is important in your camera as it helps to stabilize your images. It reduces the effect of handshakes or movement while shooting a video or taking a shot.

What is Image Stabilization?

When you are handholding your camera, and taking a still photo or shooting a video there is a strong likelihood of an unintentional camera movement (shake). The tremble of your hand as you hold the camera, the slight jarring when you press the shutter release – even a tiny movement during the exposure can result in blurring in the image.

Camera movement can be any of the following movement directions.

The classical way to prevent camera shake is by using a tripod. Of course, a tripod is not always perfect, and much of its effectiveness depends on how sturdy the surface it is situated on. Additionally, a manual release can cause slight camera shaking, so a self-timer or a camera remote control is recommended. In addition, tripods cannot be used in all situations.

Camera makers had tried their best to find a way that your camera body compensates for that unwanted movement so you have a higher chance of getting a sharp shot.

A short history of Image Stabilization

In 1995 Canon offers another method of reducing, if not eliminating, the effects of camera shake: Image Stabilization (IS). While Nikon’s first VR lens came out in 2000. They approached the problem of camera shake laterally. Rather than trying to stop the camera from moving, a stabilized lens introduces a compensating movement within it, with the aim of keeping the image static on the camera’s sensor.

After that, camera makers introduce the same concepts in their products with different names: 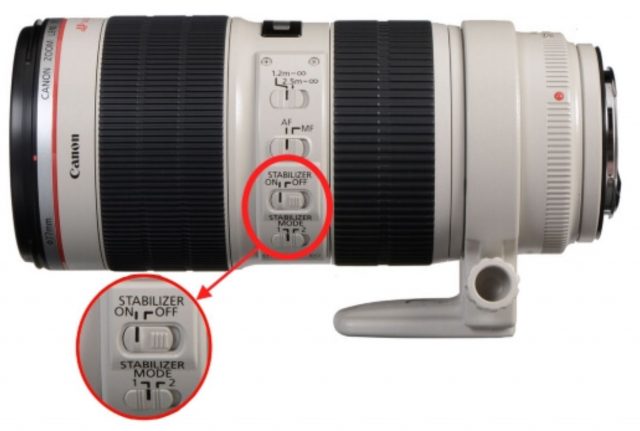 Lens-based stabilization system uses a floating lens element (or a group of elements), which is electronically controlled (by an onboard processor), then it is shifted opposite to any camera shake recorded by the camera.

Two gyro sensors inside the lens barrel detect camera shake, one for yaw (side-to-side movement) and one for pitch (up-and-down movement). The sensors detect both the angle and speed of the movement.

The following sequence of events takes place when the camera shutter release button is partially depressed: 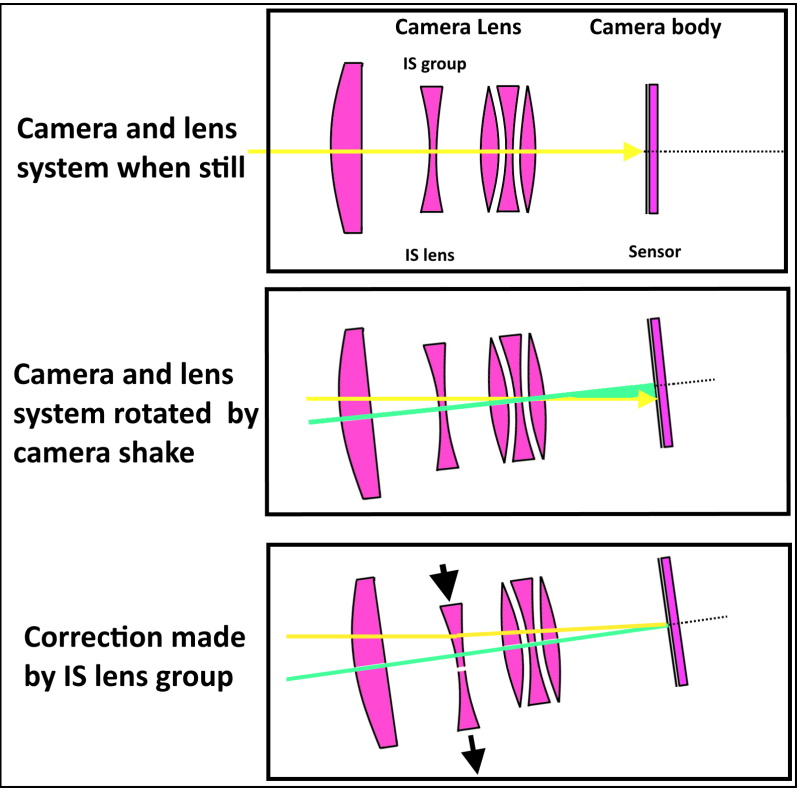 In recently released IS lenses, you have three IS modes, as follows:

This useful mode takes the benefits of standard IS (effective for both horizontal and vertical camera motion) but, instead of being active all the time, it activates only when you fully press the shutter button to capture an image.

Mode 3 is especially useful for sports photography where you are likely to be moving between subjects quickly.

When to use image stabilization

There are some scenarios when you actually benefit from using a lens with image stabilization, they are:

*The reciprocal rule: when shooting handheld, you need to use a shutter speed at least as fast as 1/the focal length of the lens to avoid camera shake.  Therefore, if you’re shooting a 50 mm lens, you’ll want your shutter speed to be 1/50.

Pros and Cons of Lens Stabilization 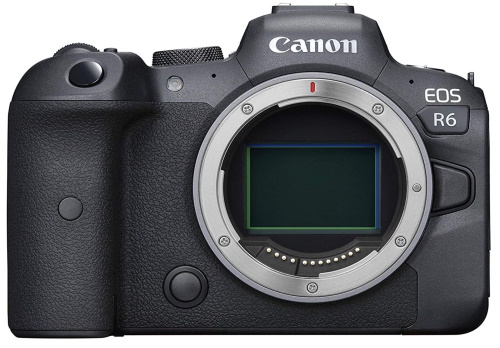 The in-Body Image Stabilizer (In-Body IS) system is powerful on its own. However, what makes it more powerful is how it coordinates with the Optical Image Stabilizer (Optical IS) system on compatible lenses. It makes it possible to reduce camera shake by up to eight shutter speed stops equivalent when using non-stabilized lenses.

Canon’s first cameras to be equipped with In-Body Image Stabilizer (In-Body IS) are The EOS R5 and EOS R6.

The information from the various sensors in the in-camera image stabilization system is combined with information from the various sensors on the lens (via the high-speed RF mount communication system). Then it is used to move the lens IS unit or shift the image sensor as necessary to achieve the best results. As shown in the below video from Canon

Detailed data from the following three key components are sent to the DIGIC X image processor for camera shake detection:

The camera uses this information to determine the value, direction, and speed of the camera shake, allowing it to shift the image sensor to stabilize the image. When a lens with in-lens (optical) image stabilization (Optical IS) is attached, camera shake information from the gyro and acceleration sensors in the lens is also incorporated into the image stabilization calculations to perform Coordinated Control IS. 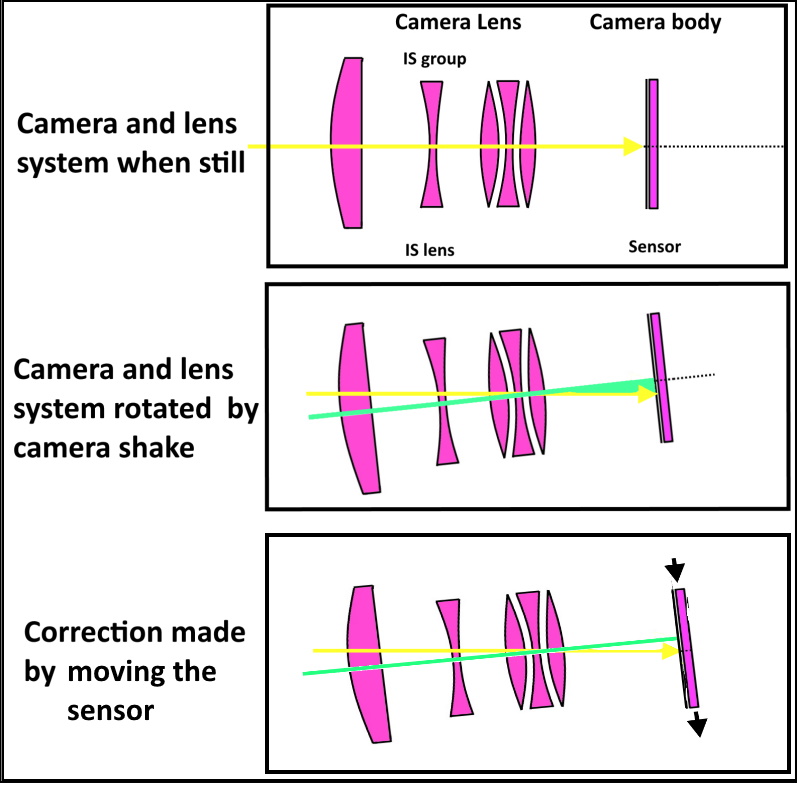 Pros and Cons of In-Body IS

The cons of IBIS totally No longer exist when using the combined OIS and IBIS as in the new update of Canon cameras.

Electronic Image Stabilization (EIS) is a highly effective method of compensating for hand jitter that manifests itself in distracting video shakes during playback. EIS relies on an accurate motion sensor for tracking the source of the jitter, which may be a handshake or vehicle motion for example. The motion information is then integrated during the current video frame and used to compensate for it by cropping the viewable image from a stream of video frames.

The EIS stabilizes the image using the image sensor. The image processor traces the data from the image sensor in real time. The data is analyzed using different algorithms detecting and measuring any changes in the recorded image. For the EIS system to effectively compensate the shake and shift the image within specific limits, additional regions must be created at its edges.

Since EIS does not rely on mechanical compensation like optical methods, it can track and compensate for large input motion in sports-oriented applications for phones or action cameras.

Stabilization should be incorporated into long focal length lenses for sports and wildlife photographers, while also being available in cameras for all other situations. I see that Canon finally has done that in its new IBIS.

The featured Photo by ArtHouse Studio

Written By
Amin Hashem
More from Amin Hashem
Most of the parents seen their kids, even very younger kids, pick...
Read More