One of the most important things that can improve a photographer’s shot is a new flash. While there is already a flash in place on most DSLRs, these are small built-in units that do not produce much light, and that light can’t be altered or controlled. A detachable flash unit can provide a bright, even light that can be altered by the photographer to achieve the perfect shot.

When you are going to choose a flash, there some basic factors you should consider: Knowing In what type of photography you are planning to use a flash. For instance, studio photography, portrait, social media, macro etc. Understanding the jargon and terms used in flash specifications, so you can objectively compare different flash units. Finally, find the best price that suits your budget.

In this post, I’ll concentrate on explaining the terms and jargon that are used in flash description and specification, because there are many of them and probably, if you are a new in flash photography, you never hear of them before.

The guide number of a flash is an indication of its power. The higher the number is, the more powerful the flash. A good understanding of flash guide numbers will help clarify why one flash can cost $100 and another can cost $400.

A guide number is found by multiplying the flash-to-subject distance by the aperture for a well-exposed photograph. For example, if good results are produced by using f/11 for a subject that’s 5 meters away, the guide number is 55. You need to know the film speed used, and that the distance was measured in meters, so guide numbers are usually written as “55 (ISO 100, meters). Sometimes the ISO value will be stated, but if it isn’t, it is assumed that the guide numbers are calculated at ISO 100. There is a calculator to help you do the math for different ISO values.

The mathematical formula for calculating flash guide numbers is:

When you’re considering a new flash purchase, the only number that the manufacturer provides is the guide number – it’s up to you to figure out the other two numbers in the equation. It is very useful to understand the importance of GN when picking a flash. I’d rather have a flash that would allow me to fire at close to 30 feet at f/8 rather than only 10 feet.

However, with the auto flash exposure systems of Speedlites and EOS cameras, there is rarely any need to become involved in the mathematics of guide numbers.

Modern Speedlites provide an autoflash exposure feature. The exposure is determined by measuring the brightness of the flash illumination reflected from the subject. However, the sensors that measure this reflected light are actually found inside the camera, rather than in the Speedlite. The way in which autoflash metering operates has evolved over the years. The following autoflash systems are listed down below.

This is the basis of TTL (through-the-lens) autoflash metering used by the built-in flash. The system works as follow: When you press the shutter button, the shutter opens and the flash fires. The flash illumination is reflected back from the subject, through the camera lens and onto the sensor. From here, the light is reflected down to a sensor in the base of the camera. This sensor measures the brightness of the light and, in real time during the exposure, controls the duration of the flash to provide the correct exposure.

A low-power pre flashlight and the ambient light are monitored and are used to calculate the required flash parameters. The actual flash output and its duration are still controlled during the exposure. The advantage of A-TTL over TTL auto flash is that correct exposure is given up to the maximum range of the Speedlite regardless of the lighting conditions.

Unlike TTL and A-TTL autoflash metering, the E-TTL system does not monitor the flash output during the actual exposure.

The duration of the flash from modern Speedlites is faster than 1/1,000 second, and often as short as 1/10,000 second. This suggests that you should be able to shoot with the camera shutter set to 1/1,000 second. But before going on, we need to discuss how the shutter of your DSLR camera works.

DSLR cameras, however, use the focal-plane shutter. This consists of two metal curtains positioned just in front of the digital sensor. At the start of the exposure, the first curtain opens to expose the image frame. At the end of the exposure, the second curtain moves to cover the area up again, as shown in the following video.

Each curtain takes time to travel the width of the frame. If you wait for the first curtain to reach the end of its travel before the second curtain is released, the fastest shutter speed possible is somewhere between 1/60 and 1/500 second (depending on the camera).

You need to set a shutter speed that allows the first curtain to reach the end of its travel before the second curtain starts to move, and allows the flash to fire in this exact timing between the movement of both curtains as shown below.

It is possible to use flash at higher shutter speeds than the flash synchronization speed. This is called high-speed synchronization, or FP (focal plane) flash, and is set on the control panel of the Speedlite.

This is done by increasing the duration of the flash so that it gives a constant output while the moving slit formed by the focal plane shutter moves across the sensor or film. This is called ‘long-burn’ flash, and It is illustrated in the below photo.

High-speed synchronization is useful for fill-in flash with fast-moving subjects − athletes and cyclists, for example. The faster shutter speed helps to ‘freeze’ the movement of the subject, while the flash adds detail to shadow areas. It can also be useful when shooting portraits outdoors with fill-in flash in bright sunlight.

Slow speed synchronization simply means shooting with flash at slow shutter speed. The main purpose is often to brighten the background behind a stationary subject illuminated by the flash. With a moving subject, this often captures two different images − a sharp image of the subject taken with the short duration of the electronic flash, and a blurred image of the subject taken by ambient light at the longer duration of the slow shutter speed. Results are often unpredictable and can be varied by altering the shutter speed. The photo below is via Canon infobank. 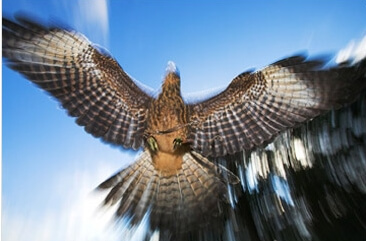 The autozoom capability of a Speedlite can adjust the flash output to the focal length of the lens being used does. It ensures that the flash coverage matches AOV (the angle-of-view) of the lens. This means there is no ‘wasted’ light, where the flash illuminates more of the subject than you can see through the viewfinder. And there are no areas that have poor illumination at your scene. The photo below illustrates the concept of flash autozoom feature. 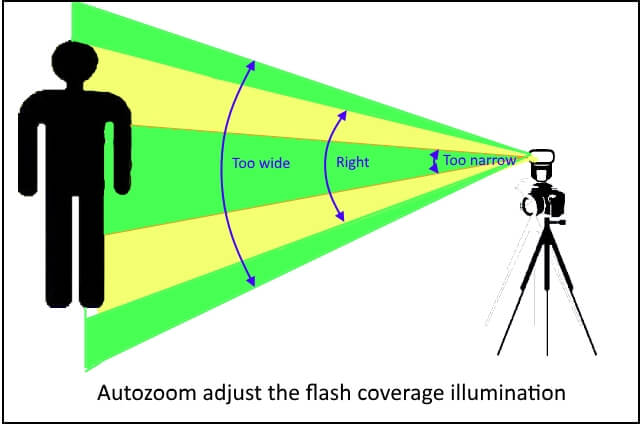 Digital image sensors in the EOS range come in three sizes: APS-C (1.6x crop), APS-H (1.3x) and full-frame (1.0x). The sensor size affects the field-of-view of the image. For example, a 50mm lens on a cropped sensor camera has the equivalent field-of-view of an 80mm lens on a full-frame camera. By detecting the sensor size of the camera, an advanced Speedlite can zoom to cover the actual field-of-view, which means that no power is wasted. This leads to more accurate flash exposures, a quick flash recycle time and more flashes per set of batteries.

The wireless flash system means that you can fire two or more Speedlites together without any cables linking them. Working with multiple Speedlites gives you more control over your subject lighting. For example, the main light can be used away from the camera, and other units can be used to provide backlighting or illuminate the background.

Synchronizing the flash outputs, and control each output to give the correct amount of light for the subject. A series of pre-flashes are fired and the system automatically calculates the output required from each unit. It then fires all the units to give what should be a correctly exposed, well-balanced flash image.

The recycling rate of a digital SLR flash is the amount of time it takes for the flash to reach full power after being fired. Recycle rates are measured in seconds. They normally vary between 4 to 8 seconds. Being able to rapidly fire your flash will be very helpful especially if you are a fast shooter or if you’re taking a lot of photos in rapid succession in an environment where the light is dim, suddenly the recycle rate of your flash unit becomes a lot more important than it was before. You can decrease your flash recycle time by connecting it to an external battery pack. Not only do you get a faster flash to recycle rates when using an external battery pack, but you also get more exposures before the flash power runs out. 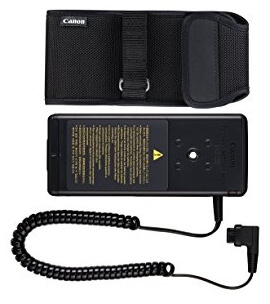 These flash add-ons are designed to soften the light emitted by your external flash by spreading the light out over a wider surface area. They are made of a translucent material (typically white) and fit over the top of the flash. 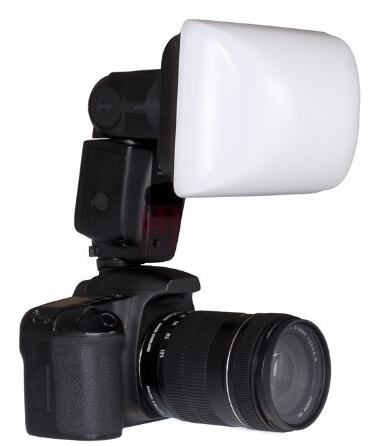 What Is The Use Of A Flash Diffuser? – Simple Tutorial

<meta itemprop="description" content="One of the most important things that can improve a photographer’s shot is a new flash. While there is already a fl