The modern digital camera system consists mainly of two main parts, a camera body, and a lens. With an interchangeable lens camera, it also includes a mount for attaching the lens to the camera body. The mount provides communication between the lens and the camera, such as autofocus, electronic aperture control, and much more.  The performance of a lens and its mount significantly influences the quality of imagery delivered by a camera system.

In 1987, Canon introduced EF lenses and the first EOS Camera, which featured the world’s first fully electronically controlled lens mount: the EF Mount. EF mount is used by Canon in their Digital DSLR cameras (cameras with mirrors in them).

However, as technology advances rapidly, the need to design a new lens mounting system to accommodate these new technologies is apparent. Thus the new R system is announced in 2018 with the introduction of the first full-frame mirrorless Canon camera: Canon EOS R Mirrorless Camera. RF mount is the new mount from Canon that is used on their lineup of full-frame mirrorless cameras.

While EF and RF mount is similar, they are not interchangeable. EF mount lenses can be used on RF mount with an EF to EOS R adapter: 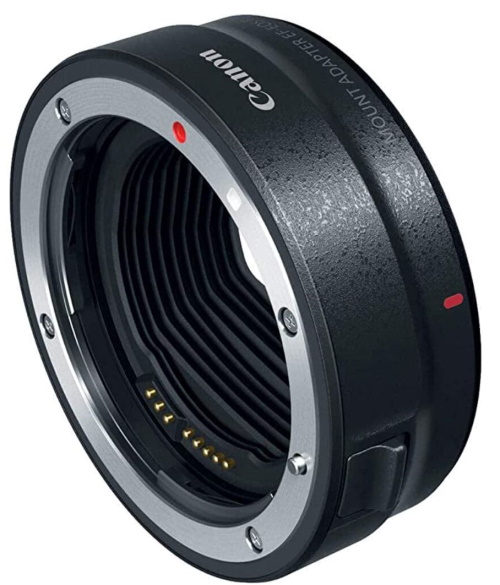 However, RF mount lenses cannot be used on EF mount (DSLR camera) at all at the moment.

RF mount lenses can only be used on the new full-frame mirrorless camera such as EOS R, EOS RP, EOS R6, and EOS R5.

Beginning with a new lens mount, the EOS R is the first camera to support Canon’s line of RF-mount lenses. This mount is characterized by its wide 54mm diameter and short 20mm flange-back distance, which promotes the ability to design lenses that are both faster and smaller than their SLR equivalents. The mount also incorporates a 12-pin electronic contact system for more sophisticated autofocus and image stabilization capabilities. So, let us discuss the RF lens mounting in some detail.

The Flange Back Distance (FBD) is the distance between the mounting flange on the camera mount and the sensor plane. This is the point where the lens focuses the image onto the image sensor. 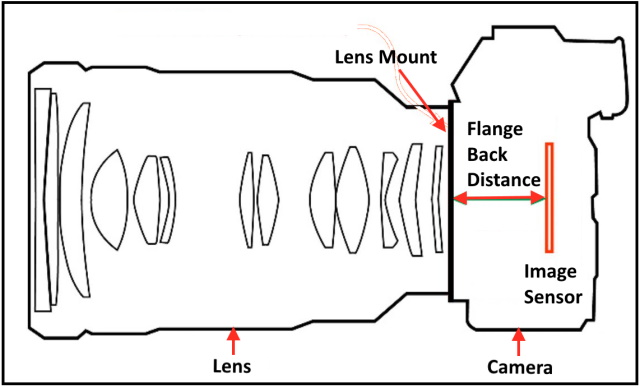 If the “FBD” is too far, the light entering the rear element is condensed and it is harder to reduce aberration.

The most important factor that determines a camera’s flange distance is whether the camera has a mirror. A mirror mechanism increases the minimum required flange distance for a camera system.

If one would place the lens mount (and thus the rear glass elements) too far back, the mirror would hit it every time it flips. Typically, SLR and DSLR systems, which include a mirror, have flange distances around 45mm. For example, Canon’s EF mount has a 44mm Flange Back Distance.

The shorter flange focal distance means that the rearmost lens element can be placed closer to the sensor. In other words, the back-focus distance (the distance between the rearmost lens element and the image sensor) can be made shorter. This not only enables the camera body to be made more compact but also allows more flexibility in lens design. What was difficult to do with EF lenses can now be achieved.

Canon managed to reduce the flange-back distance from 44mm to 20mm, bringing it in line with comparable systems like Sony FE or Nikon Z. The lenses are also physically wide, with a large 54mm inner diameter. The wide diameter allows a large element to be placed at the rear of the lens, which reduces the scope for optical aberrations and means lenses can be designed with fewer overall elements, which means they can be made smaller.

These large lenses can also provide other advantages. For example, if we compare the RF 28-70mm f/2L and Its nearest EF equivalent in focal range the EF 24-70mm f/2.8L II USM, we will notice that the wider lens design specific to RF makes it possible to have a larger constant aperture of f/2 throughout the zoom range. Generally, a larger mount diameter allows for a larger aperture diameter. While the RF mount, is the same size as the EF mount, its new design allows more freedom in optical design, paving the way for lenses with larger maximum apertures in the RF lens line-up. 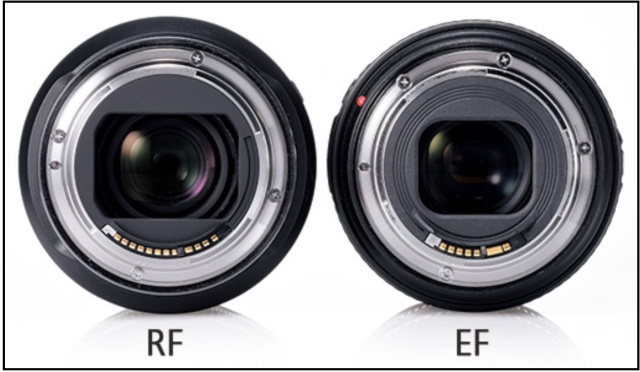 The RF mount has 12 connection pins, more than the eight pins on EF lenses, and it is also equipped with an improved transmission protocol. These help to increase the speed and volume of data transmission between the camera body and lens.

With the Digital Lens Optimizer featured in the Digital Photo Professional software it is possible to correct lens aberrations and diffraction, which are the causes of deterioration in image quality. It offers a comprehensive solution to address aberrations that cannot be eliminated with in-camera correction. You can adjust the level of effect to obtain the intended image quality.

The (DLO) is one feature that has benefitted from the new RF mount, in at least two ways:

An EF lens equipped with image stabilization has a system inside the lens to detect camera shake. The system includes two gyro sensors inside the lens barrel, one for yaw (side-to-side movement) and one for pitch (up-and-down movement). The sensors detect both the angle and speed of the movement. Then the microprocessor in the lens moves the IS lens elements the precise amount and direction required to counteract the amount and direction of the camera shake. The result is that the image remains stationary on the camera sensor. 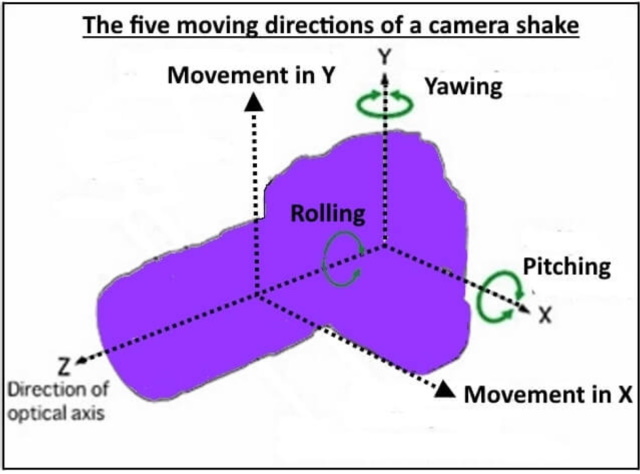 With the RF lens (that only can be used with the EOS R camera), Dual Sensing is incorporated this system uses the conventional system found in the EF lens, and additionally uses information from the image sensor to detect camera shake that conventional IS finds hard to detect. This results in better, more precise image stabilization. 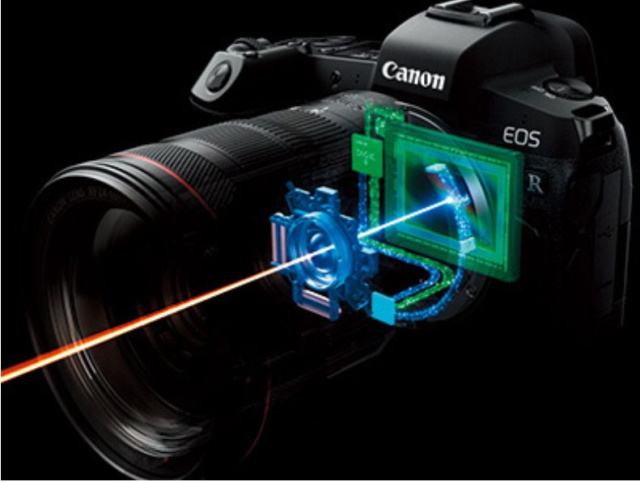 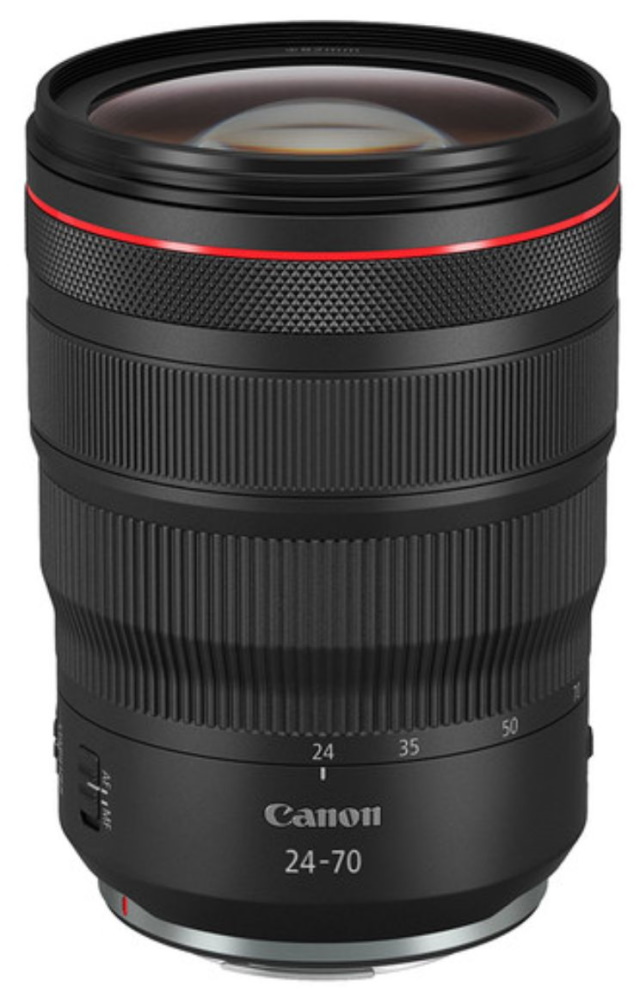 The use of a larger mount diameter and short back focus enables RF lenses to be designed for even better image quality. For example, it allows a large lens element to be placed very close to the image sensor, and this helps achieve better corner-to-corner image quality.

Canon EF lenses for EOS DSLR cameras have a long-standing history of high performance, however, in recent years, it seems that the camera industry is heading towards mirrorless design, Sony is the leader, and Canon and Nokia seem to join the trend. I believe that Canon’s new generation of the RF lens range for EOS R full-frame mirrorless cameras is the result of the future trend toward switching the DSLR design to the mirrorless design.

Some events support this trend, slowly but surely, we’re increasingly starting to see more and more write-ups from the various photography outlets that some EF lens has discontinued. If you were about to invest in a new EF camera, you may be worried about the removal of so many lenses from production.

Written By
Amin Hashem
More from Amin Hashem
Different tasks call for different tools, so the basic question is when...
Read More